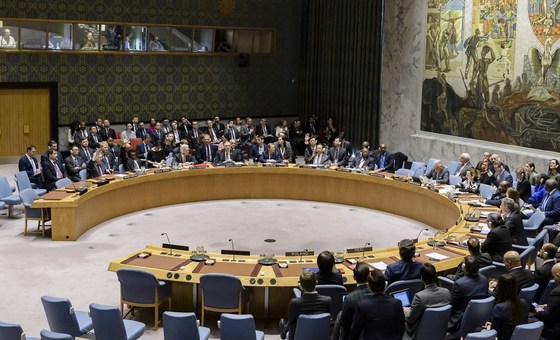 A sharply divided United Nations Security Council discussed the political crisis in Venezuela during an emergency meeting called by the United States on Saturday, with the council’s African members pressing for a national dialogue and respect for Venezuelan sovereignty rather than the forced removal of President Nicolás Maduro.

The contentious meeting began with Russia challenging whether the matter should even be before the council, while accusing the U.S. of playing geopolitical games to achieve regime change. The U.S. and a number of Western and Latin American countries have recognized a new government under Juan Guaidó, the national assembly leader who declared his own interim presidency on Wednesday.

That led to a 9-4 vote on whether Venezuela even belonged on the Security Council agenda, with South Africa and Equatorial Guinea voting no alongside Russia and China. Côte d’Ivoire, the third African nation holding a current council seat, joined Indonesia in abstaining from the vote.

Gbolié Desiré Wulfran, representing Côte d’Ivoire, urged a peaceful resolution of Venezuela’s long-simmering political and economic tensions, which have spilled into the streets and claimed at least 26 lives. Hundreds of people have been arrested in clashes with security forces, rights groups said.

Anatolio Ndong Mba, Equatorial Guinea’s representative, insisted that any solution must be in keeping with Venezuela’s constitution, while the crisis is the internal matter of a sovereign nation. Maduro was just re-elected to his second term two weeks ago, and while some in the international community question the legitimacy of the outcome it doesn’t rise to the level of a threat to international order.

The representative for Malabo reminded the Security Council of the tragic consequences in the Middle East and in Africa, when foreign governments want regime change but disregard what happens after that.

Equatorial Guinea’s position runs counter to that of Brazil, where new President Jair Bolsonaro is aligned with Argentina, Chile, Peru and other regional neighbors in supporting Guaidó; there are 11 states, members of the regional Lima Group, who condemned Maduro’s leadership and the electoral process that delivered it as illegitimate, and refused to recognize the Venezuelan president.

Also serving on the Security Council is South Africa, which was quick to note that President Cyril Ramaphosa extended his congratulations to Maduro earlier this month on the basis of Venezuela’s self-determination in conducting its own elections.

“A founding principle of South Africa’s constitutional democracy, that we hold very dear, is the respect for the rule of law,” said Ambassador Jerry Matjila, the South African representative to the council. “We are therefore deeply concerned by what is a clear attempt, in Venezuela, to circumvent the country’s constitutional legal mechanisms which govern its elections.”

South Africa is firmly against any unconstitutional change of government in Venezuela, Matjila said, echoing the forceful Russian position that the Security Council should not be co-opted into an “unethical ploy.” Yet U.S. Secretary of State Mike Pompeo countered that both Russia and China were propping up the Maduro regime solely to recover billions of investment dollars that went to Venezuelan cronies.

That brought a challenge from Chinese representative Ma Zhaoxu, who strongly opposed the U.S. accusations and insisted China does not meddle in the affairs of other nations. That’s been Beijing’s position on Venezuela. “China has consistently pursued the principle of non-interference in other countries’ internal affairs, and we oppose foreign interference in the internal affairs of Venezuela,” said Hua Chunying, spokeswoman for China’s Ministry of Foreign Affairs, during a Thursday briefing.

While the African nations aligned with China and Russia, the UK, France and Canada are among those supporting Guaidó. The Popular Will party leader is head of a Venezuelan legislature that Maduro has dismissed as illegitimate and in 2017 arbitrarily replaced with his own lawmakers; in recent days, the Venezuelan Supreme Court has found all National Assembly decisions null and void – including its decision to reject Maduro – as a crisis five years in the making reaches its political breaking point.

Germany and Spain joined France and the UK in issuing an ultimatum Saturday, demanding that Venezuela hold new elections within eight days or they will permanently recognize Guaidó – a position consistent with a European Union statement issued late last week. “The EU strongly calls for the start of an immediate political process leading to free and credible elections, in conformity with the constitutional order,” said the European Union in its statement. “The EU fully supports the national assembly as the democratically elected institution whose powers need to be restored and respected.”

Yet South Africa opposed that position, with Matjila telling Russian media the Europeans should reconsider their stance. On the other hand, Matjila said South Africa remains deeply concerned over the humanitarian and human rights crisis that Venezuelans have endured.

Those who stay in the country experience severe shortages of food, medicine and other needs, against a backdrop of fear as security forces target opposition voices. Some three million Venezuelans have fled, and last year were crossing the border at a rate of 5,500 per day, according to United Nations refugee agency (UNHCR) estimates released in December. That’s resulted in the launch of a UN response to manage the cross-border flows that is the first of its kind in the Americas.