Home>Finance & Economics>Masisi returns from Botswana's first-ever trip to Davos
By AT editor - 28 January 2019 at 5:14 am 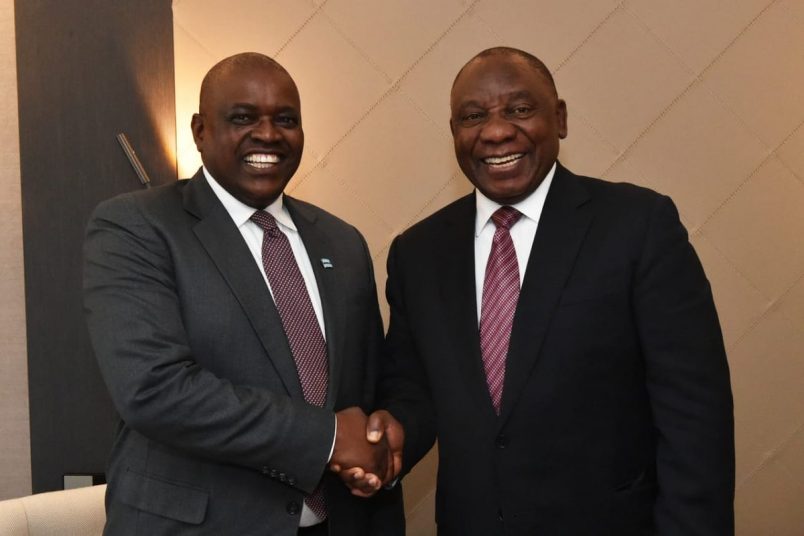 President Mokgweetsi Masisi returned to Botswana at the weekend, after the southern African nation was invited to participate in the World Economic Forum at Davos for the first time – and he said there was “a lot of excitement” when the delegation told the Botswana story.

“We met a whole range of civil society and business leaders from the biggest corporations to the youngest start-ups,” he said at an airport press conference. “The most interesting was owned by a 33-year-old multimillionaire from Holland.”

Masisi kept the details to himself, but said his ambassador will follow up with the potential for skills development and jobs for Botswana. He also said Switzerland was an example of a knowledge-based economy that his nation hopes to partner with while transforming its own.

Botswana’s president also had the chance to meet with African leaders, including presidents Paul Kagame of Rwanda, Yoweri Museveni of Uganda, and Cyril Ramaphosa of South Africa, seen at right in the image with Masisi.

Masisi, who faces elections in October, said Botswana will be attending the forum again next year with a bigger delegation including private sector partners.

The 2019 WEF meeting, with its Globalization 4.0 theme, ended Friday. Participants focused on a range of topics tied to global economic and climate change challenges, with a number of sessions specifically designed to address Africa’s investment, infrastructure, and other development issues.