Home>News>Wildfire at Lion's Head threatens coastal Cape Town communities
By AT editor - 28 January 2019 at 5:57 am 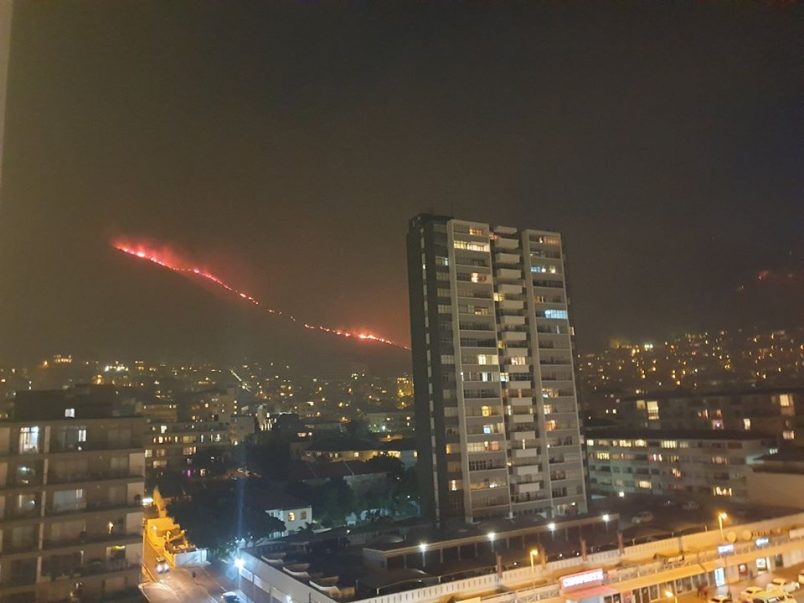 A wildfire in South Africa threatened a popular tourist landmark on Sunday, as fire crews battled flames hoping to contain the spread before it forced evacuations in neighboring Cape Town communities.

The fire broke out on the slopes of Lion’s Head mountain, a 669-meter peak known as a hiking destination near the coast in the city’s west.

The wind-driven flames spread quickly, beginning in Tamboerskloof to the east and then climbing the slopes above Fresnaye and the Sea Point area, which are among Cape Town’s most affluent communities. South African President Cyril Ramaphosa owns a property in upper Fresnaye at the base of Lion’s Head.

At least one person was injured with serious burns, according to local media reports.

Residents took to Twitter to say the winds were raging and it was raining ash in Sea Point, and that some people evacuated because they were having difficulty breathing. Those unable to sleep and closely watching the fire posted updates throughout the night.

The Cape Argus reported that by 10 p.m. Sunday many residents were leaving, but there were not yet any official evacuation orders from the city.

The Volunteer Wildfire Services agency asked the public to avoid the area to ensure access for the emergency services vehicles, and confirmed that the fire remained out of control. They also warned the fire had spread into Table Mountain National Park, and said people should stay out of the park lands.

Although Cape Town is subject to wildfires during the summer season, drought conditions have made the risk greater. The Lion’s Head fire is just one of several in South Africa in recent weeks.