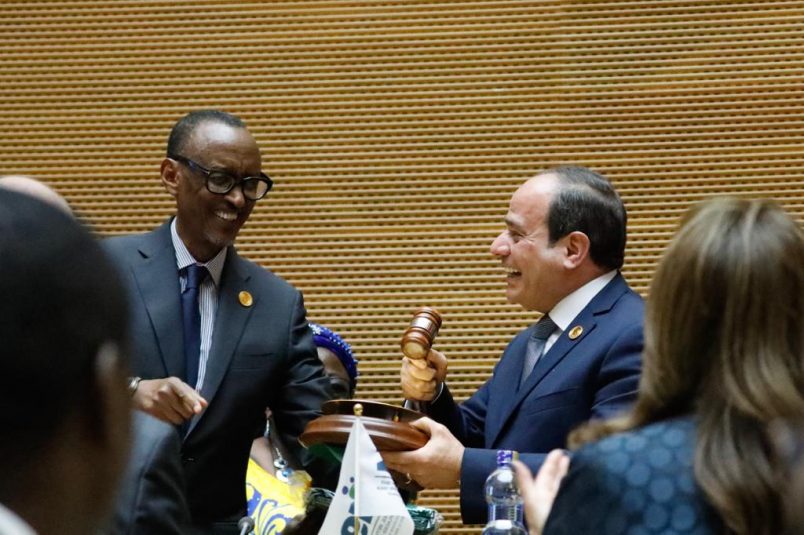 Rwandan President Paul Kagame and his Egyptian counterpart, Abdel Fattah El-Sisi, each addressed the African Union assembly on Sunday as the outgoing Kagame handed over the AU leadership to Sisi.

In his remarks to African heads of state, Sisi called for the creation of more job opportunities and investments. He focused on terrorism and extremism as the top challenge facing the continent. For his part, Kagame noted that the USD$89 million AU Peace Fund now sees support from 50 African nations, which “demonstrates the force of our collective resolve and ability.”

United Nations Secretary General António Guterres addressed the AU on Sunday, as did guests Dr. Tedros Adhanom Ghebreyesus of the World Health Organization and Bill Gates, of the Bill and Melinda Gates Foundation.

Other leaders presenting to the AU across the two-day summit include President Mamadou Issoufou of Niger, who spearheaded the African Continental Free Trade Area (AfCFTA) agreement and will report on its progress. President Alassane Ouattara of Cote D’ivoire will update on the AU’s Agenda 2063.

Meanwhile, African Union Commission Chairman Moussa Faki Mahamat marked progress on peacebuilding in Central African Republic and support for “often difficult” democratic elections on the continent. He welcomed Sisi and Egypt’s new AU leadership role, as the meeting focuses on the theme of refugees and migration.

The four vice-chairs elected alongside Sisi include South African President Cyril Ramaphosa, who will take over in 2020, as well as Tshisekedi, Issoufou and Kagame.