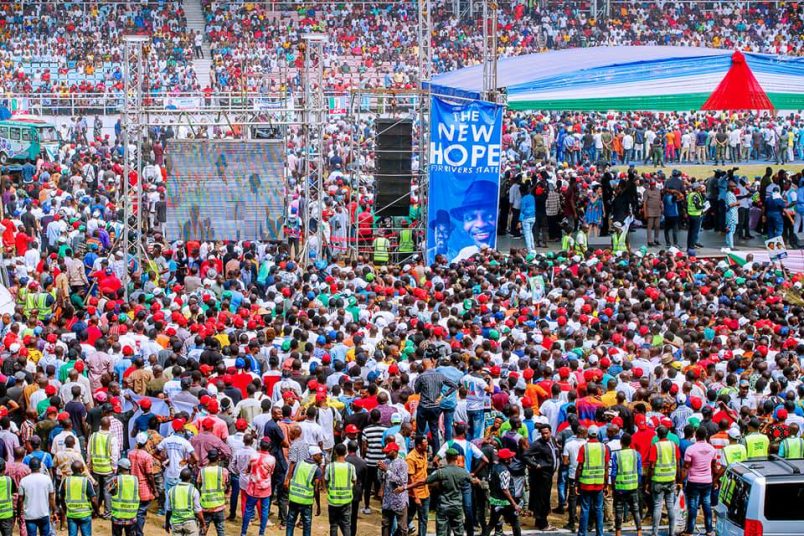 At least 14 people have died following a stampede at President Muhammadu Buhari’s campaign rally in Port Harcourt on Tuesday.

Nigerian media outlets including The Nation report the deaths are confirmed by a media spokesman for the University of Port Harcourt Teaching Hospital (UPTH), where many of the victims were taken. There were also many injured when the crowd pressed against gates at the Adokiye Amiesimaka stadium where Buhari was speaking as part of the All Progressives Congress rally.

The incident also is confirmed by Nigerian police in Rivers State, but with few details. Police said they are launching a full investigation into the fatal rally stampede, which comes just four days before Nigerians head to the polls for the presidential election. Buhari and the APC had not issued a formal statement by early Wednesday.

The Port Harcourt incident comes amid concerns over rising electoral tensions and the potential for political violence, as Buhari faces off against main opposition candidate Atiku Abubakar of the Peoples Democratic Party.

The PDP has warned the APC in recent days, while accusing Buhari of intentionally inciting violence among his supporters. The APC flatly denies the allegations, and said the PDP was “peddling falsehood, scaremongering and misinformation” in a press release issued Tuesday.

The Port Harcourt tragedy also comes as news of yet another fire at Independent National Electoral Commission (INEC) facilities, this time in Anambra State.  It is the third such fire since February 2, a trend the Nigeria Police Force said earlier this week it will address with tighter security.