Home>News>Tanzania's latest media crackdown targets The Citizen
By AT editor - 27 February 2019 at 2:42 pm 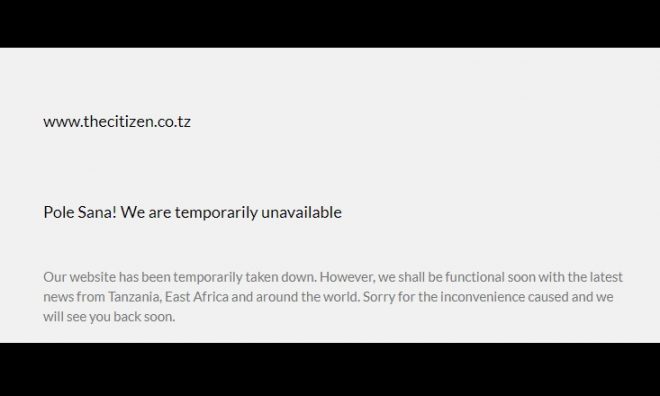 A leading English-language newspaper in Tanzania has been shut down for a week after a story on the country’s currency angered government officials, who accused The Citizen of publishing fake news.

The Kiswahili site for The Citizen remained functional, with an explanation of what happened.

“The closing of The Citizen magazine, which is Mwananchi’s sister, for seven days means that it will be back to market next Thursday,” said the Mwananchi site.

The news outlet was informed of the decision in a letter sent by Tanzania’s Department of Information, which came as a shock to editor Bakari Machumu.

“We have received the government order in frustration, but as a company we always believe in working in accordance with the law, so we will serve the penalty as directed,” Machumu said.

The Citizen published a story on February 23 that included expert comment on the collapse of the Tanzanian shilling across the past three years. But the letter said The Citizen “deliberately wrote lies and misleading information” without following legal procedures or financial standards applied by the country’s central bank.

That story reflected a trend in misinformation, the government said, citing a July 2018 story on United States Senator Bob Menendez and his concern over shrinking democratic space in Tanzania under President John Magufuli. An archived copy of that story focused on human rights abuses, which has been a cause for increasing concern in the international community and among African NGOs.

Angela Quintal, the head of Committee to Protect Journalists Africa who was herself detained in Tanzania in November, called the decision “very bad news” for the country.

Tanzania’s crackdown on journalists under Magufuli has escalated since his 2015 election. Members of the media, as well as political opposition leaders, are commonly harassed and detained. Some have died, including CHADEMA party members Godfrey Luena and Daniel John in February 2018. Others remain missing, such as journalist Azory Gwanda, who disappeared more than a year ago.