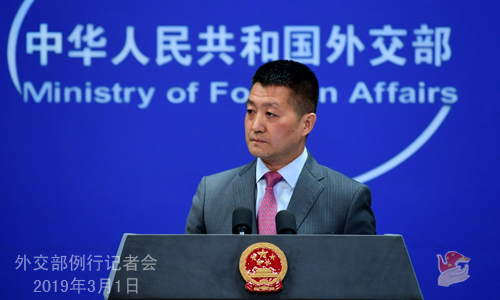 The government of China has extended its congratulations to President Macky Sall of Senegal, who was declared winner of the country’s February 24 election by the Commission Electorale Nationale Autonome (CENA).

Lu Kang, spokesman for China’s Ministry of Foreign Affairs, welcomed the news during a Friday briefing and said Sall will continue to “score greater achievements” in the West African nation’s development.

“China and Senegal are good friends and good partners. In recent years, our two countries have deepened our comprehensive strategic cooperative partnership,” Lu said. “China and Senegal, as co-chairs of the Forum on China-Africa Cooperation (FOCAC), shoulder important responsibilities in moving forward the comprehensive strategic partnership of cooperation.”

The two countries have a close relationship, with President Xi Jinping including Senegal on his 2018 African tour ahead of a BRICS meeting hosted by South Africa. China also is making significant investment in Senegal’s infrastructure, including roads and industrial parks, as well as bankrolling the USD$34 million Musée des Civilisations noires (MCN) that opened in Dakar in December – an African heritage museum that Sall called “a gift from China.”

Sall won the election with 58 percent of the vote, CENA said, meaning he won’t face a second round. Opposition candidates have three days to appeal following Thursday’s announcement but there’s no immediate indication that they are. Those candidates included Issa Sall and the Unity and Assembly Party (PUR); Ousmane Sonko of Pastef; Idrissa Seck of Coalition Idy 2019, and Madické Niang of Madické Coalition 2019.