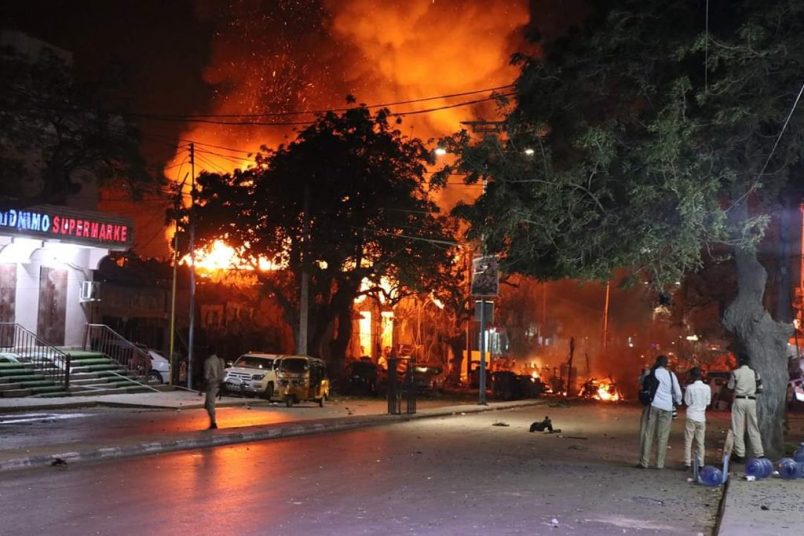 The death toll has risen to at least 30, as Somalia once again grappled with a massive terrorist attack in Mogadishu that became a daylong siege near the Maka Al Mukarama Hotel and Hilaac UK restaurant.

The attack began about 9 p.m. Thursday when a car loaded with explosives crashed into the buildings, followed by armed gunmen who engaged Somali security forces in a firefight that lasted much of Friday. A second explosion followed about an hour later.

Somalia’s Aamin Ambulance service, which shared images of the blaze and its aftermath online, said its emergency personnel were on the scene for 22 hours tending to the casualties. Dozens of people also were reported injured.

Al-Shabaab claimed responsibility for the attack, the latest in a series targeting hotels and neighborhood districts popular with government officials and foreigners. An October 2017 bombing in the Soobe area killed hundreds of people.

Somali Prime Minister Hassan Khayre, speaking to the media, condemned the attack and offered condolences to victims and their loved ones, some of whom he visited in hospital. He vowed that the government will continue the fight against extremists and called on the international community for its continued support.

The United Nations Secretary General and UN Mission in Somalia also condemned the attacks. They came as AMISOM, the African Union force in Somalia, announced the handoff of a key military training academy to Somali forces – a symbolic stepping stone in the transfer of security responsibilities to Mogadishu.

A report released Thursday by the Norwegian Refugee Council said 320,000 Somalis fled their homes because of conflict in 2018, a 50 percent increase from the previous year.