Home>Health>WHO's Tedros warns DR Congo security situation may set back Ebola gains
By AT editor - 15 March 2019 at 5:31 am 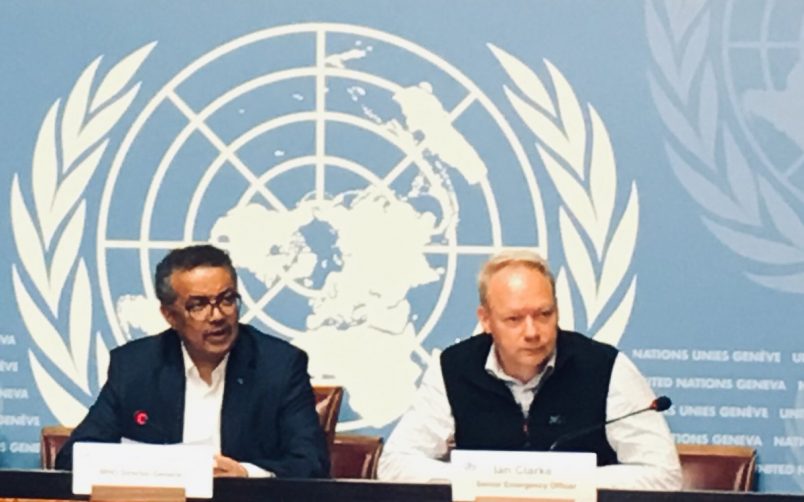 Ethiopian Tedros Adhanom Ghebreyesus, director general for World Health Organization, said Thursday that the spread of Ebola in the Democratic Republic of Congo has been contained in 11 of the 28 communities where cases are recorded.

Yet the struggle continues, amid ongoing security challenges in the North Kivu and Ituri provinces where the outbreak is centered – and where an attack at a Biena health center was reported just hours earlier.

One person was killed by a stray bullet and another injured in the incident, as crowds attacked the Mambowa center and Biena hospital over tests needed from an Ebola victim who died. Congolese authorities said they are going to Biena on Friday to help calm the situation.

“Security remains our number one concern,” Tedros said during a press conference in Geneva. “The attacks on Ebola treatment centers are not attacks by the community but on the community, by armed groups including Mai Mai and ADF. These attacks could reverse the gains we have made.”

Butembo and Katwa remain the Ebola outbreak hotspots, with Katwa accounting for more than half of all new cases in the last 20 days. Of the 867 confirmed cases, 258 of them are in Katwa, as are 11 of the 65 probable cases.

Four more fatalities in Masereka followed reports last week of the first two, a man with a confirmed Ebola diagnosis and his wife. There are now 587 fatalities, the DR Congo’s Ministry of Health said Thursday, with 182 of them in Katwa. Overall cases have reached 932, with 867 confirmed and 65 probable.

There are 74 health workers infected with Ebola to date, among them 26 fatalities, according to the most recent update from WHO.