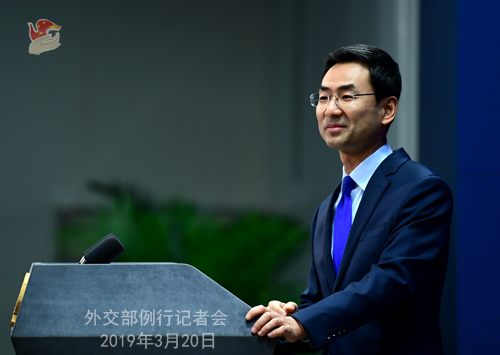 China is again denying any untoward economic goals in Djibouti and other African nations, as Beijing gets set to host the next Belt and Road Initiative forum in April.

Chinese Ministry of Foreign Affairs spokesman Geng Shuang, speaking at Wednesday’s daily press briefing, responded to questions on how China’s investment in Djibouti is “expanding its global influence” and may be harming the economy.  Geng also was asked about Kenya’s debt burden following Chinese investment in the Mombasa-Nairobi railway.

“As an old Chinese saying goes, the world would have been a tranquil place but for those who stir up trouble and eventually bring trouble onto themselves,” Geng said. “Some people seem to be worrying themselves sick about China-Africa cooperation.”

He said that Mahamoud Ali Youssouf, foreign affairs minister for Djibouti, and President Uhuru Kenyatta of Kenya are satisfied with outcomes and relationships.

“China will continue to enhance practical cooperation with Africa” as part of the Belt and Road strategy, and “advance implementation of the outcomes reached at the 2018 FOCAC Beijing Summit,” Geng said. “We hope more countries will truly care for Africa.”

His remarks come amid new unease over China’s Belt and Road plans. With President Xi Jinping set to arrive in Rome on Thursday, diplomats in the United States and European Union are unnerved by Italy’s decision to participate in the April forum. Meanwhile, India is signaling that it won’t participate over longstanding concerns about its sovereignty.

African leaders will represent many of the more than 100 countries expected to attend. There are 123 countries and 29 international organizations that have signed initiative agreements.