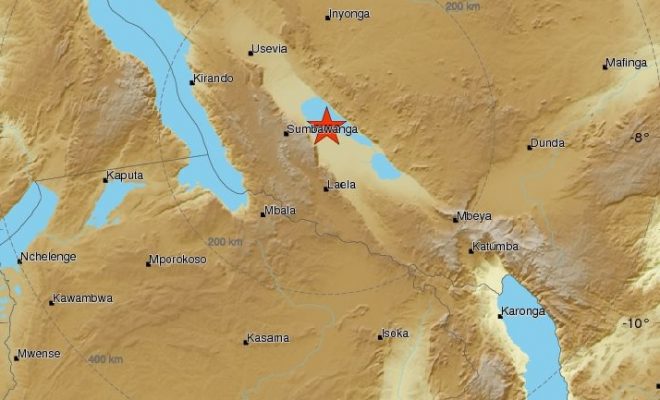 At least one person has died following a moderate earthquake that struck Thursday in the Lake Rukwa region of southwestern Tanzania.

The 5.5-magnitude quake, centered beneath the lake itself, hit at 12:15 p.m. local time and affected the Katavi, Mbeya, Rukwa and Songwe regions. The fatality occurred south of the A104 route in the village of Iyula, when a house collapsed from the tremors, according to ITV in Dar es Salaam.

At least four houses collapsed in the Mbeya region, while other buildings showed cracks and other signs of damage. The shaking caused residents to flee buildings in the city of Mbeya, where the mayor rushed out of a meeting, and in Sumbawanga, to the west of the lake.

People in Malawi, in Kigali in Rwanda and in Uganda’s Kampala, as well as in Zambia said they felt the shaking, according to reports collected by the United States Geological Service (USGS). The USGS initially reported the quake as a 5.1-magnitude on the Richter scale but later upgraded the strength.

The earthquake occurred in a seismically active region of the East African Rift, in the same place where a December 1910 earthquake struck, measuring 7.4-magnitude and considered one of the most powerful in Africa’s modern history. The Kanda Fault, a likely site for that earthquake, runs quite near to Sumbawanga.

A separate earthquake near Virginia in central South Africa early Friday measured at 4.9 magnitude. There were no immediate reports of injuries or damage.