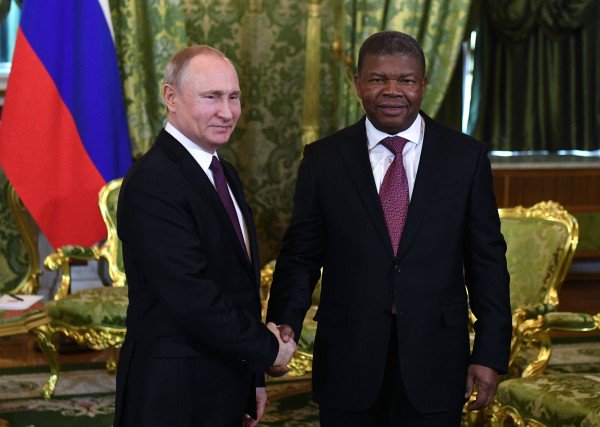 The two leaders signed agreements on developing fisheries and aquaculture, and in diamond mining and processing, according to the Russian presidency’s office. They discussed economic issues and culture, as well as current international and regional matters.

Lourenço presented one of Angola’s highest honors, the Order of Agostinho Neto, to Putin as a sign of gratitude for the years of support to his nation. Neto was the first president of Angola.

On Wednesday, Lourenço had the opportunity to address the Russian parliament to promote public-private partnerships and joint ventures between the two governments. He focused on manufacturing, agribusiness and energy, among other sectors for which he welcomed Russian investment.

He also gave a nod to Russia’s cooperation in fighting terrorism, drug trafficking and other security issues.

Lourenço met with Vyacheslav Volodin, Russia’s speaker for parliament, and with representatives of Alrosa, a Russian diamond mining giant with operations in Angola, as well as neighboring Botswana and Zimbabwe. Alrosa holds a 32.8 percent share in the Catoca mines in Angola’s Lunda Sul province, and is a founder of Angola’s Luemba mining company.

The Angolan news agency ANGOP said the president would visit the Bolshoi Theatre and tour historic buildings in Moscow during his stay.