Home>Articles>Ilhan Omar pushes back on Muslim ban, Trump's personal attack
By AT editor - 14 April 2019 at 3:33 am 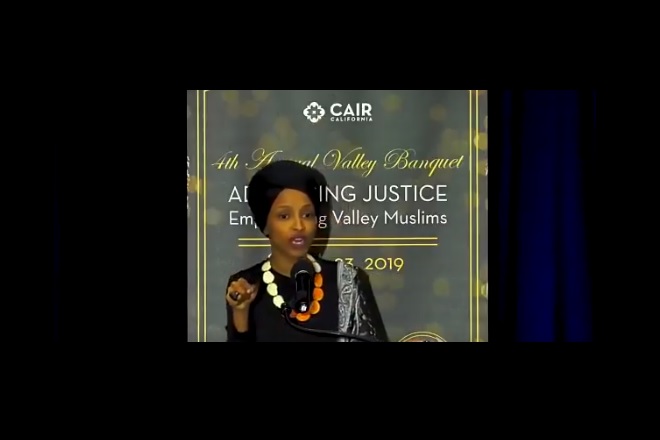 In the United States, Somali-American Rep. Ilhan Omar – a legislator serving the state of Minnesota in the U.S. Congress – is pushing back at President Donald Trump’s anti-Muslim Twitter attack against her, which on Friday followed introduction of a Democratic Party bill to overturn a U.S. travel ban that its opponents say targets Muslim-majority nations including Somalia.

“No one person – no matter how corrupt, inept, or vicious – can threaten my unwavering love for America. I stand undeterred to continue fighting for equal opportunity in our pursuit of happiness for all Americans,” she said. “Thank you for standing with me – against an administration that ran on banning Muslims from this country – to fight for the America we all deserve.”

It’s the latest in an escalating series of troubling attacks on Omar that reflect the administration’s hostility toward Muslims and immigrants, which in turn stokes the fury of Trump’s nationalist voters.

Omar, under fire in recent months because of her stance on U.S. foreign policy issues, was targeted by Trump himself when the U.S. president tweeted a short “never forget” video clip featuring images of Omar speaking about Muslims while juxtaposed with fiery footage of the September 11, 2001 attacks.

It followed Omar’s original statement conveying that the U.S. indeed suffered an attack on its homeland orchestrated by Muslim extremists, but the backlash against all Muslims in the U.S. was unwarranted simply because “some people did something.” That remark, lifted out of context from Omar’s March 23 speech to the Muslim advocacy organization Council on American Islamic Relations, touched off a new round of anger even as protesters outside the venue called for Quran-burning and sending Omar to hell.

Trump’s video message renewed an outcry over the administration’s travel ban, but the opposition fury is primarily because of incitement of violence against Omar. The legislator faces frequent death threats because of her positions on Israel, as well as her visibly Muslim faith and commitment to overturning the travel ban.

Some of the worst episodes illustrate deep divisions in the U.S. over race, religion and Omar’s status as an immigrant, and the vocal xenophobia to the political right. A New York man was arrested last week in connection with death threats against Omar, who became a U.S. citizen after arriving from Dadaab refugee camp in Kenya in 1997. Her family lived there for four years after fleeing civil war in Somalia.

Authorities have investigated a number of threats made against her and others, including Rep. Rashida Tlaib, a Muslim Palestinian-American from Detroit, Michigan. Tlaib, along with a few prominent Democratic Party leaders, spoke out against Trump in Omar’s defense while sharply criticizing some of the party’s elected officials for distancing themselves from Omar and controversies that surround her.

“They put us in photos when they want to show our party is diverse,” said Tlaib, who is also a fierce opponent of Trump’s policies. “However, when we ask to be at the table, or speak up about issues that impact who we are, what we fight for and why we ran in the first place, we are ignored. To truly honor our diversity is to never silence us.”

Last month, Omar was targeted because she advocates for a review of U.S. commitments to Israel and supports Palestinian rights, a position that opened her to accusations of anti-Semitism. Conservative politicians demanded an apology as some in her own party agreed, but ultimately passed a more broad  legislative resolution that condemns all hate, whether directed against Jews, Muslims or others. It was followed by a fresh round of insinuations that Omar’s Muslim practices opened the door to Sharia law.

“Think about it. Omar wears a hijab,” said Fox News host Jeanine Pirro, whose commentary is popular among conservatives. “Is her adherence to this Islamic doctrine indicative of her adherence to sharia law, which in itself is antithetical to the United States Constitution?”

Pirro suggested that Omar’s views on foreign affairs don’t arise from within her own Democratic Party’s values, so they must come from an allegiance to something other than American values. That turned Omar’s own words against her, after the newly elected representative said that U.S. support for Israel is itself akin to allegiance to a foreign country.

The news network condemned Pirro’s remarks and suspended her show until the end of March, though she never apologized herself. Trump supported Pirro’s anti-Muslim sentiments and blasted Fox News.

In February – just six weeks after Omar took office – Trump called for Omar’s resignation, while U.S. Vice President Mike Pence demanded there be consequences for a Twitter message she sent, based on song lyrics, to suggest that money from pro-Israel lobbyists was driving U.S. foreign policy decisions on Israel.

The 2017 U.S. travel ban was originally enacted when Trump took office but later reworked because of legal challenges based on its targeting of Muslim-majority nations. The Supreme Court ruled in June 2018 that the ban, now based on security cooperation with the U.S., could remain in effect for Somalia and Libya. It also affects Venezuela, North Korea, Syria, Yemen and Iran.