Home>News>African leaders express sorrow over Notre Dame fire disaster
By AT editor - 16 April 2019 at 3:35 am 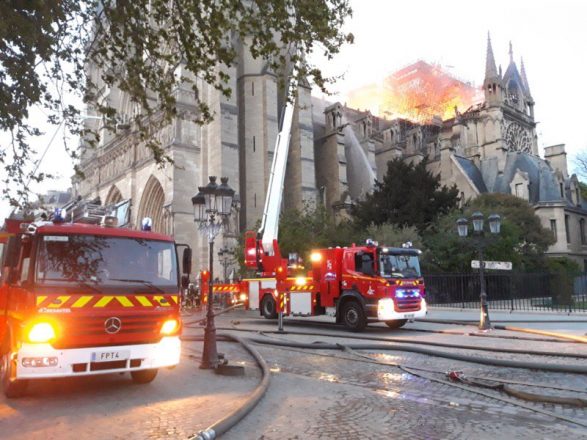 People all around the world were riveted by the flames as the Cathedral of Notre Dame in Paris burned on Monday night, heavily damaging the centuries-old landmark and cultural symbol of France.

The fire broke out during a Roman Catholic Mass shortly before 7 p.m. local time, and quickly spread to the roof and church spire, which collapsed in the blaze. It was hours before firefighters were able to bring the fire under control, and they continued to protect as much of the structure as possible well into Tuesday morning.

Jean-Claude Gallet, commander of the Paris Fire Brigade, told Le Monde that the exterior structure was saved, including its twin bell towers, but two-thirds of the roof had collapsed. Much of the wooden interior of Notre Dame also burned.

Meanwhile, Parisians gathered to watch – some praying and singing – as their counterparts around the world demonstrated solidarity with them in the loss. President Emmanuel Macron expressed his shared sorrow with the French people, and promised to rebuild the cathedral, which was under renovation when the fire started.

President Macky Sall was quick to send his condolences, calling Notre Dame one of the biggest symbols of France. “On behalf of Senegal, I express our solidarity with France and the whole Christian community throughout the world,” he said.

Moroccan King Mohammed VI also sent Macron a message of solidarity while lamenting the loss of both a cultural and historic treasure, and a place of worship and prayer.

Egyptian President Abdel Fattah el-Sisi also sent his condolences. “I deeply regret the news of the fire in the historic tower at the Cathedral of Notre Dame,” he said, calling it a “great loss for all mankind.”

The cause of the fire remains under investigation. One firefighter was reported injured.