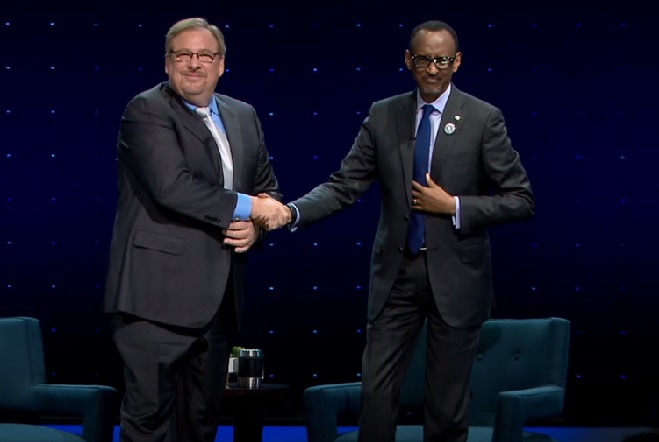 The human rights record of President Paul Kagame of Rwanda is under renewed scrutiny after he appeared at the weekend with Christian pastor Rick Warren, left, at his Saddleback Church to focus on reconciliation and the recovery of trauma.

Kagame, who has a long relationship with Warren’s Baptist-affiliated megachurch in California, appeared during the April 14 church service. He described Rwanda’s journey to healing from a 1994 genocide that claimed the lives of more than 1 million people, primarily Tutsi but also moderate Hutu and others opposed to the brutal killings.

The nation is currently marking the 25th anniversary of Kwibuka, the annual remembrance of the 100 days of genocide.

Kagame described the need for Rwanda to become one family again, as a starting point for recovery that leads to the truth about the genocide and accountability for what happened.

That didn’t sit well with critics, including Aristide Rwigara, the brother of Rwandan dissident Diane Rwigara – an opposition  leader who was imprisoned after challenging Kagame for the presidency in 2017.

“Why would (Warren) give attention to someone who has closed thousands of churches and who has consistently denied human rights to his own people?” said Aristide Rwigara in an interview with the Los Angeles Times. “This cannot go unchallenged. Warren is a global figure, and if you want to wear the mantle of spiritual leadership, why would you do this?”

Warren, however, has developed a relationship with Kagame since his first visit to Rwanda in 2005, after the president read his popular “The Purpose Driven Life.” Kagame emphasized the need for forgiveness and hope, and his own leadership role in facilitating those possibilities for Rwanda and its future.

The complete interview with Kagame is available from Saddleback Church at this link.