Home>News>Kenya museum fossils lead to giant carnivore discovery
By AT editor - 20 April 2019 at 1:43 am 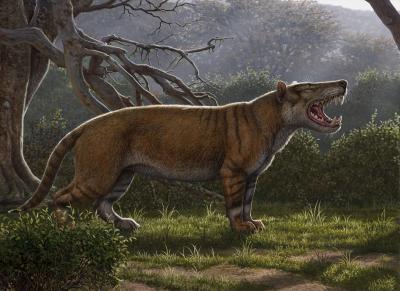 Paleontologists at Ohio University in the United States say they have discovered a new species of large carnivore, after taking a second look at fossils stored in a drawer at the National Museums of Kenya.

The 22-million-year-old fossils were found in Kenya decades ago by researchers focused on ancient apes, but they instead led to the discovery of Simbakubwa kutokaafrika published this week in the Journal of Vertebrate Paleontology.

“Opening a museum drawer, we saw a row of gigantic meat-eating teeth, clearly belonging to a species new to science,” said lead study author Dr. Matthew Borths. He was conducting postdoctoral research at Ohio University at the time, and is now curator of the Division of Fossil Primates at the Duke Lemur Center at Duke University.

Borths, working with colleague Dr. Nancy Stevens, identified the creature – whose name in Swahili means “big lion” – as part of an extinct group of mammals called hyaenodonts. They were the first mammalian carnivores in Africa, and stood at the top of the food chain for about 45 million years after the extinction of non-avian dinosaurs.

“Simbakubwa is a window into a bygone era,” said Stevens. The Simbakubwa kutokaafrika was larger than a polar bear, with a skull the size of the rhinoceros and large canine teeth. It would have lived in eastern Africa with ancient apes and monkeys.

Ultimately, hyaenodonts worldwide went extinct. “We don’t know exactly what drove hyaenodonts to extinction, but ecosystems were changing quickly as the global climate became drier,” Borth said. “The gigantic relatives of Simbakubwa were among the last hyaenodonts on the planet.”

“This work has the potential to help us understand how species adapt – or fail to adapt in this case – to a rapidly changing global climate,” Marenda said.