Home>News>Kenneth aims at Mozambique; storm fatalities in Comoros
By AT editor - 25 April 2019 at 6:20 am 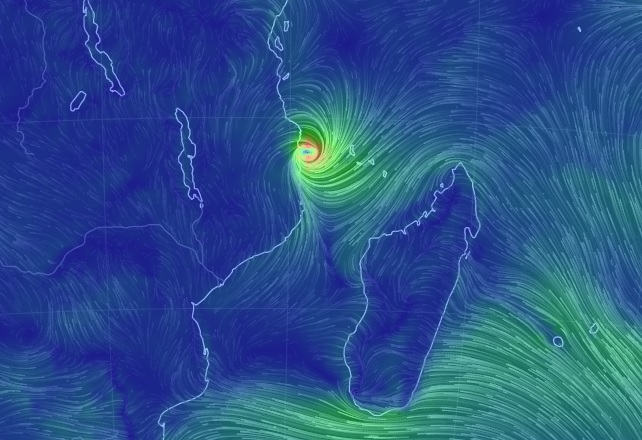 As if the southern African nation of Mozambique wasn’t already facing enough of a challenge in the aftermath of Cyclone Idai, now Cyclone Kenneth is bearing down on the impoverished southeast African nation.

The storm’s position on Thursday was some 167 kilometers northwest of Comoros, and it rapidly intensified into a dangerous storm as it continued on a western track approaching the coast. Further intensification is expected before the storm makes landfall, said the Joint Typhoon Warning Center in its advisory.

Meteo France also is keeping an eye on the storm, with an upgraded forecast for an intense cyclone to reach destructive winds of at least 166 kilometers and up to 213 kilometers per hour. Mozambique’s INAM meteorological agency issued a red alert for the storm, expected to affect about 700,000 people.

The current trajectory in the agency’s forecast has the storm making landfall in the politically volatile Cabo Delgado region, near Mozambique’s border with Tanzania, after passing Comoros. Parts of the island group saw 200 km/h winds, according to local news agencies.

“There are several devastated homes, uprooted trees, scattered (roofing) sheets everywhere. The country is still without electricity,” said the Comoros military. “No region has been spared.”

The seaside presidential palace in Moroni, where about 500 people are displaced, sustained minor damage. Comoros authorities are still clearing roads and ask that people stay in their homes.

Officials in Comoros issued a red alert warning for the storm, which dumped torrential rains on rising rivers. A storm surge breach in Foumbouni and Badamadji forced the evacuation of Foumbouni hospital. At least two peopled died because of the storm.

As it heads toward Pemba, Kenneth is not good news for Mozambique following the devastation caused by the Cyclone Idai landfall near Beira on March 14. More than 1,000 people died in a powerful storm that hit three nations, including Malawi and Zimbabwe, with more than 600 fatalities occurring from winds, flooding rains and storm surge just in Mozambique.

The suffering in the aftermath of the storm is staggering. There were 6,596 cholera cases reported through Monday, according to the Ministry of Health, and another 14,863 malaria cases in Sofala province. There are 72,793 displaced persons living in 65 shelters, many of them poorly equipped, across four different provinces. More than 1.3 million people are receiving food assistance.

It will be another two months before the debris in Beira is fully cleaned up, the government said.