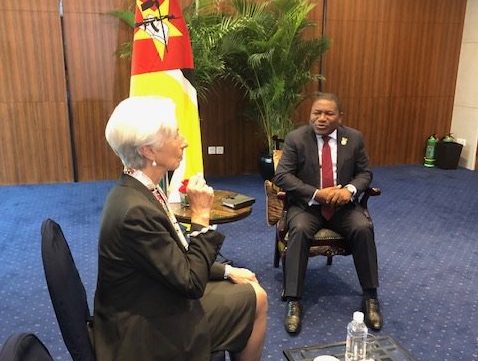 President of Mozambique Filipe Nyusi met with Christine Lagarde, the head of the International Monetary Fund (IMF) as they attended the Belt and Road Forum in Beijing. She assured him that a USD$118 million loan, approved by the IMF last week to support recovery from Cyclone Idai impacts, reflects the IMF support for the impoverished and debt-stricken nation and is likely to spur other international donors to help.

An estimate from World Bank puts the cost of rebuilding at more than $2 billion, and the IMF described the emergency assistance and reconstruction costs as “enormous, making this storm the worst and costliest natural disaster to ever strike the country.”

Now the southern African nation faces new damages from Cyclone Kenneth, which hit the Cabo Delgado region where Mozambique has been banking so much of its economic future.

Yet advocates opposed to debt crises in the developing world say the emergency zero-interest loan is an unfair approach to Mozambique’s desperation. Loans that follow a catastrophe leave countries in debt for years, as was the case following West Africa’s Ebola disaster, the campaigners said.

“It is a shocking indictment of the international community that a country as impoverished as Mozambique has to borrow from international institutions in order to cope with the devastation caused by Cyclone Idai,” said Sarah-Jayne Clifton, the director of Jubilee Debt Campaign based in the UK.

“Emergency grants should be available to all impoverished countries in response to disasters like Idai, especially those linked to the climate breakdown primarily caused by richer countries in the global North,” she added.

Authorities are still evaluating the scope of the new damage from Kenneth, which claimed one life in Mozambique and sent 18,000 into shelters after making landfall Thursday night. The storm has now stalled over Cabo Delgado, increasing the flood threat with rainfall totals of 500 mm in the hardest-hit areas.