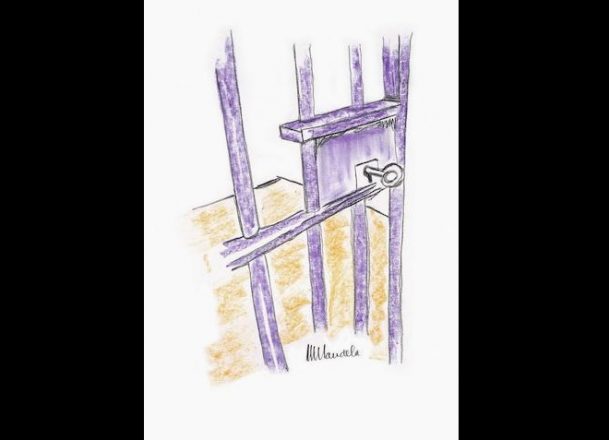 Original artwork created by Nelson Mandela will be showcased next week during an auction of Modern and Contemporary African Art at Bonhams in New York.

The sketch called “The Cell Door,” created in wax pastel crayon, is part of a series that Mandela began working on in 2002 alongside art teacher Varenka Paschke.

“When my father retired as the president, he didn’t have much to do,” said his daughter, Dr. Pumla Makaziwe Mandela-Amuah, who has previously owned the piece. “I think for him, art was a good way of expressing himself or trying to come to terms with his history and his (I wouldn’t want to say) demons but just coming to terms with his whole life.”

Mandela completed some 22 sketches of images that resonated with him emotionally and spiritually, all related to his years of incarceration on Robben Island. Ten were later reproduced in collections completed in 2002 and 2003, but this one of Cell No. 5 remained with the Mandela family.

“Today when I look at Robben Island I see it as a celebration of the struggle and a symbol of the finest qualities of the human spirit, rather than as a monument to the brutal tyranny and oppression of apartheid,” he said in his reflections. “It is true that Robben Island was once a place of darkness, but out of that darkness has come a wonderful brightness, a light so powerful that it could not be hidden behind prison walls, held back by prison bars or hemmed in by the surrounding sea.

“I have attempted to color the island sketches in ways that reflect the positive light in which I view it,” Mandela added. “This is what I would like to share with people around the world and, hopefully, also project the idea that even the most fantastic dreams can be achieved if we are prepared to endure life’s challenges.”