Home>News>Flooding follows initial Kenneth impacts in Mozambique
By AT editor - 28 April 2019 at 4:59 am 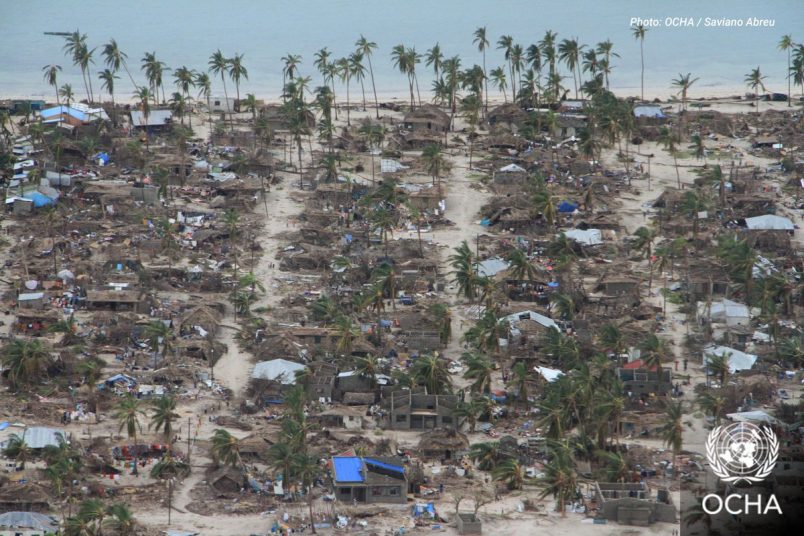 Mozambique continues to deal with the effects of tropical storm Kenneth, which is dumping heavy rain across Cabo Delgado province and parts of Nampula and Zambevia.

The storm came into Cabo Delgado at landfall as a strong cyclone with winds of 220 kilometers per hour, but has since stalled over the northern part of the country with rains exceeding 50mm in a 24-hour period forecast by the INAM meteorological agency on Saturday.

Cyclone Kenneth made landfall at the end of the rainy season, when river levels were already high. The Messalo, Montepuez and Megaruma rivers were placed on high alert for potential flooding, with thousands of people seeking higher ground to avoid rising waters.

Severe flooding was confirmed at the Megaruma on Saturday, according to O Pais.

The rains and wind bring extra misery to a part of Mozambique where at least five people died and thousands of homes were damaged or destroyed. Images of the Mucojo community in Cabo Delgado, shared by the United Nations Office for the Coordination of Humanitarian Affairs, showed homes completely destroyed.

The island of Ibo was among the hardest-hit locations, with 99 percent of all homes leveled.

“We gather that most of the infrastructure, including commercial facilities and farms, have been significantly destroyed. Worryingly, it is still raining heavily and this is raising the risk of flooding,” said Daw Mohammed, director of humanitarian operations for the UK-based CARE organization.

Kenneth, which also wreaked havoc in Comoros, came on the heels of the devastation caused by the Cyclone Idai landfall near Beira on March 14. More than 1,000 people died in a powerful storm that hit three nations, including Malawi and Zimbabwe, with more than 600 fatalities occurring from winds, flooding rains and storm surge just in Mozambique.

The suffering in the aftermath of the storm is staggering. There were 6,596 cholera cases reported through Monday, according to the Ministry of Health, and another 14,863 malaria cases in Sofala province. There are 72,793 displaced persons living in 65 shelters, many of them poorly equipped, across four different provinces. More than 1.3 million people are receiving food assistance.

It will be another two months before the debris in Beira is fully cleaned up, the government said.