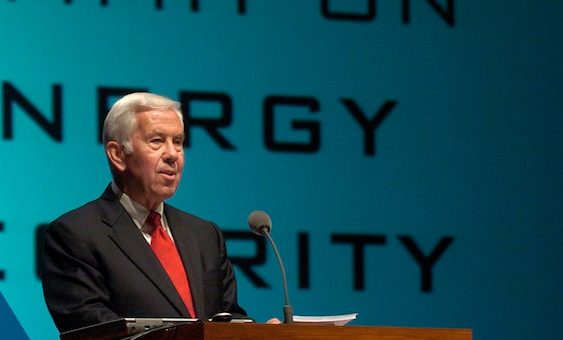 Former United States Sen. Richard Lugar of Indiana died on Sunday, according to a statement from the Lugar Center in Washington D.C. He was 87 years old.

Lugar served in the U.S. Senate for 36 years, longer than any other member of his party at the time of his retirement in 2013. He made foreign affairs a priority of his career and was chair of the powerful Foreign Relations Committee twice, serving from 1985 to 1987 and again from 2003 to 2007.

He also led efforts to end nuclear proliferation and promote arms control, working in a bipartisan spirit within Congress and with successive presidential administrations from either main U.S. political party.

After leaving office, he founded the Lugar Center to continue working on his priorities. Much of that work in global food security, foreign aid, the arms trade and good governance touched the African continent in countries including Botswana and Tunisia.

Lugar, though a conservative, became a critic of President Donald Trump and his foreign policy priorities. “The first three months of the Trump Presidency have been an exercise in squandering America’s international leverage,” he said during an April 2017 speech to the Foreign Policy Association in the U.S.

According to the center, Lugar’s death followed a battle with CIDP (chronic inflammatory demylinating polyneuropathy). He is survived by his wife, Char, and four sons including John, the executive director of the Lugar Center.