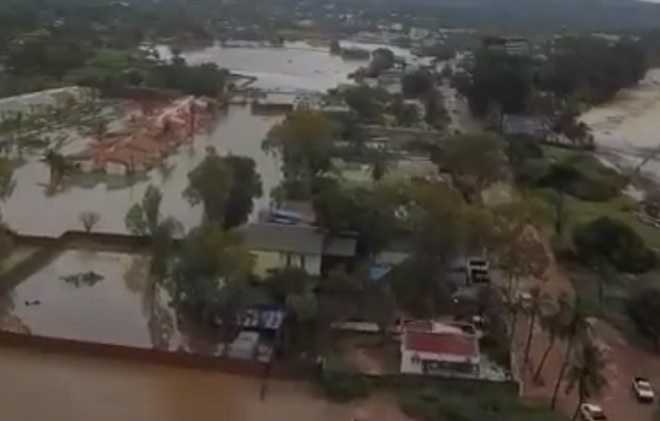 The rain keeps falling in Mozambique, where the government confirmed 38 fatalities and 39 injuries linked to Cyclone Kenneth and the flooding in its aftermath. The rain continues to inundate Cabo Delgado province and parts of Nampula.

Last week’s storm came into Cabo Delgado at landfall as a strong cyclone with winds of 220 kilometers per hour, but it has since stalled over the northern part of the country with days of unending deluge. Between 30 and 50mm of additional rain in a 24-hour period was forecast by the INAM meteorological agency through Tuesday morning.

Those rains, coupled with 50 kilometer per hour winds, are preventing some relief efforts in hard-hit communities.  The World Food Program plans to drop supplies from the air, and was able to make the first deliveries to isolated Ibo island on Monday. Nearly all structures on the island were damaged or destroyed.

At least 300 people have been rescued from floodwaters, the National Institute for Disaster Management (INGC) said in its Monday update. About 35,000 homes have been damaged or destroyed in communities including Mucojo, while 31,256 hectares of crops ruined. Severe flooding has affected Pemba, above, where two meters of rain are reported and landslides caused fatalities, as well as inundating Megaruma.

Cyclone Kenneth made landfall at the end of the rainy season, when river levels were already high. The Messalo, Montepuez and Megaruma rivers were placed on high alert for potential flooding, with thousands of people seeking higher ground to avoid rising waters.

Kenneth, which also wreaked havoc in Comoros, came on the heels of the devastation caused by the Cyclone Idai landfall near Beira on March 14. More than 1,000 people died in a powerful storm that hit three nations, including Malawi and Zimbabwe, with more than 600 fatalities occurring from winds, flooding rains and storm surge just in Mozambique.