Home>News>Namibian activists want genocide-era statue moved from restaurant
By AT editor - 3 May 2019 at 9:25 pm 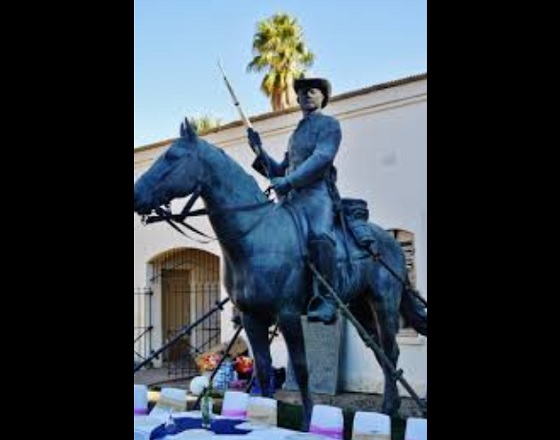 In Namibia, a replica of a despised monument to German rule and genocide has resurfaced at a restaurant in Swakopmund, a coastal city that still retains its German cultural influences in the core region where the 1904-1908 genocide happened.

The Namibian Genocide Association is demanding that the replica be removed from public view, in keeping with Namibian law. “It is insensitive for the German owner of the restaurant to deliberately erect that politically insensitive monument,” the association said last month. They are calling for the Alstadt Restaurant to lose its business license for promoting racism.

The Reiterdenkmal (Equestrian) Monument honored German fighters who were lost in the battles during the Herero and Nama genocide. It was unveiled on the grounds of a Windhoek concentration camp in 1912 to celebrate the birthday of German Emperor Kaiser Wilhelm II, and was finally removed in 2013 because it was a constant reminder to Namibians and the genocide victim descendants.

The Namibian Police Force took it from Windhoek and placed it in storage.

Laidlaw Peringa, the head of the NGA, told Erongo News he had meetings last month with the restaurant owner to persuade him to remove this monument replica but to no avail. The Alstadt owner maintains that the replica, created by a local artisan, has historical value that’s consistent with Swakopmund’s museums and attractions.

The genocide remains both painful past and difficult present for Namibians, who in recent years succeeded in getting Germany to acknowledge its role but have yet to receive any reparations. The tribal descendants recently rejected President Hage Geingob’s warning that Germany is willing to make amends through investment but not direct reparations.