Home>News>SA elections: DA beams a bold campaign message onto ANC headquarters
By AT editor - 3 May 2019 at 8:06 pm 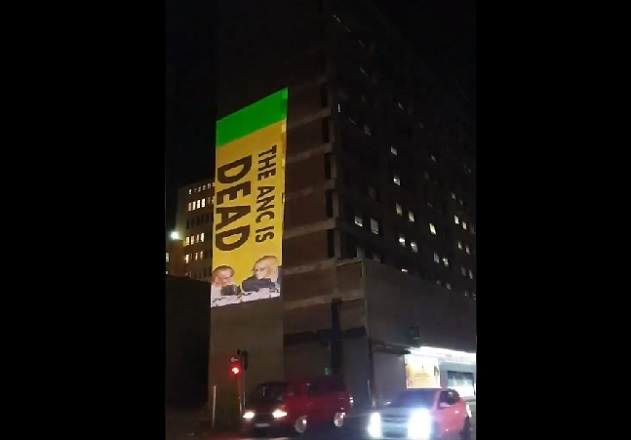 With just five days to go before South Africa’s legislative elections, the main opposition party Democratic Alliance (DA) made the rounds in Johannesburg with a novel way to send its message ahead of a final campaign rally on Saturday.

The DA paid for a digital billboard and beamed its campaign messages onto the side of the African National Congress (ANC) headquarters at Luthuli House. “The ANC is dead,” read one building-sized banner, which was followed with “We need change that stops corruption and puts a job in every home.” The campaign ad from the DA youth ended with an appeal for voters to turn out on Wednesday in what promises to be a contentious election.

A late-April 2019 poll of 2,375 voters from the South African Institute of Race Relations found support for the ANC in national races dropping below 50 percent, while the DA remained relatively stable at 21.3 percent. The Economic Freedom Fighters (EFF) party led by Julius Malema picked up some traction with 14.9 percent.

The ANC is expected to prevail, which is consistent with other polls predicting another ANC victory.

The ANC poked back at the DA over the digital billboard, characterizing it as a desperate stunt the ANC elections chair called childish. The ANC and President Cyril Ramaphosa will wrap up their efforts with a final rally on Sunday.

The DA has campaigned against ANC corruption with an entire “Prison not Parliament” website devoted to a list of ANC leaders and their alleged ties to crime and corruption. Few are spared, and the list includes Ramaphosa.

DA leaders, as with all South African politicians, remain focused on land reform, jobs and the country’s ongoing economic challenges.