Home>News>Macron assures Sarraj of France's support for GNA, UN process in Libya
By AT editor - 9 May 2019 at 5:17 am 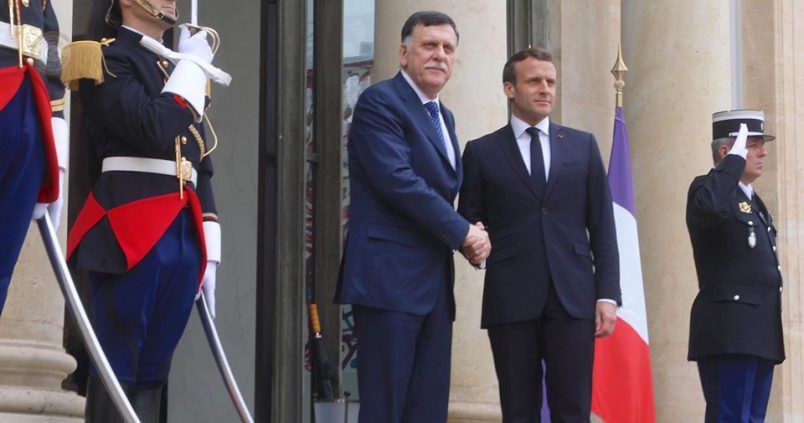 Libya’s Fayez Al-Sarraj, head of the Presidential Council for the Government of National Accord (GNA), met with President Emmanuel Macron of France on Wednesday and urged Macron to condemn the attacks on Tripoli led by Khalifa Haftar and the Libyan National Army (LNA).

Macron assured Sarraj of his support for the United Nations-backed GNA and its negotiations in Libya, and called for an immediate ceasefire in a conflict that has now claimed 443 lives since Haftar’s forces advanced on Tripoli on April 4.

“The President of the Republic reaffirmed France’s support for the Government of National Accord, with which France will continue its cooperation,” the presidency said in a statement. “He underlined all the efforts made by France over the last two years to bring together Libyan actors around an inclusive political solution, leading as soon as possible to the elections requested by the Libyan people.”

Macron also proposed an “assessment of the behavior of armed groups in Libya, including those directly under the Government of National Accord” as part of an agreed-upon need to fight terrorism.

Sarraj repeated his warning that any ceasefire comes with the condition of a complete LNA withdrawal, and that he now sees ongoing negotiations to resolve Libya’s crisis on different terms because of the Tripoli offensive. His visit to France followed stops earlier this week in Italy and Germany.

Sarraj also reminded Macron that claims of France’s support for Haftar, whether exaggerated or not, have left Libyans angry and unclear on France’s true position.

Macron promised that France will remain “fully mobilized” in support of the UN process in Libya.