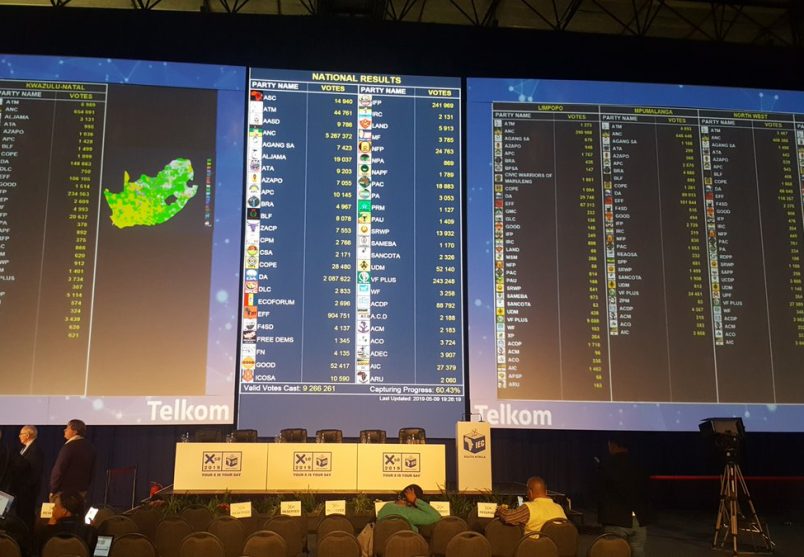 The African National Congress (ANC) was pulling in 57.7 percent of the support in South Africa’s legislative election, as the country’s electoral commission neared the end of vote-counting on Friday night.

The ANC’s lead comes with 96 percent of the vote counted by 8 p.m., as the commission wraps up a process that began with Wednesday’s election.

Except for 2014, the vote totals were up for the DA when compared with previous five-year cycles dating back to 2004, and up by more than 4 percent for the EFF with its much shorter history. So far the ANC, led by President Cyril Ramaphosa, saw its support down from the 62.2 percent in 2014 and the nearly 70 percent it held 10 years earlier.

That’s not lost on ANC election chair Fikile Mbalula, or the many observers questioning the ANC and its waning power in the wake of corruption scandals, economic stress and infrastructure challenges.

“It shows a turnaround,” said Mbalula, acknowledging the difficulty of the 2019 campaign in an interview with SABC but optimistic about the outcome. “Our people (are) saying we trust you, but we want to see you doing more.”

The rest of the vote was split across nearly four dozen other parties, most of them with less than one percent.

The provincial legislative vote was counted in the three Cape regions, but it was at 83 percent completed in the heavily populated Gauteng – home to Johannesburg and Pretoria – and at 97 percent in KwaZulu-Natal, where Durban is located.