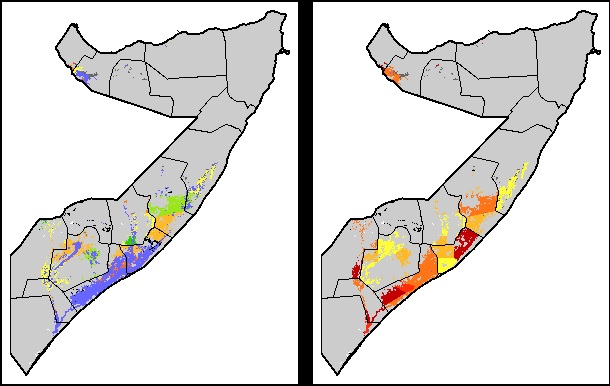 Experts with the United Nations Food and Agriculture Organization (FAO) warn that severe drought conditions in Somalia may leave 18 percent of the population facing severe food insecurity this year.

Rains in the southern growing areas never arrived in April and early May, the heart of the “gu” rainy season the farmers count on to support their crops. Those crops account for about 60 percent of the nation’s annual cereals production and would normally be harvested in July. 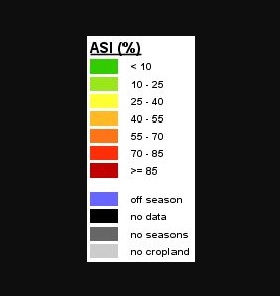 The FAO images comparing early April with early May show the deteriorating conditions for agricultural stress.

In the Lower Shabelle Region, where more than half of the total maize crop during the rainy season is grown, severe dryness prevails. “Vegetation conditions are very poor and, according to FAO’s Agricultural Stress Index (ASI), severe drought conditions are currently affecting between 45 and more than 85 percent of the cropland,” a report released Wednesday said.

In the interior sorghum-growing region northwest of Mogadishu, rains are about 60 percent below average and drought is affecting 25 to 30 percent of cropland that supports more than half of Somalia’s sorghum yield. Up to 85 percent of cowpea crops planted alongside sorghum in the Middle Shabelle, Galgadud and Mudug regions are affected by drought.

The Shabelle and Juba rivers are running low as a result, making irrigation difficult in areas that rely on them. Taken together, the trends mean some 2.2 million people face critical food shortages.

“Early depletion of cereal stocks, declining employment opportunities and low wage rates in crop-producing areas, shortages of livestock products in pastoral areas, heightened conflict and a reduction in humanitarian assistance since early 2019 are resulting in a sharp deterioration of the food security situation in Somalia,” the FAO said.

The complete FAO special report on Somalia is available here.