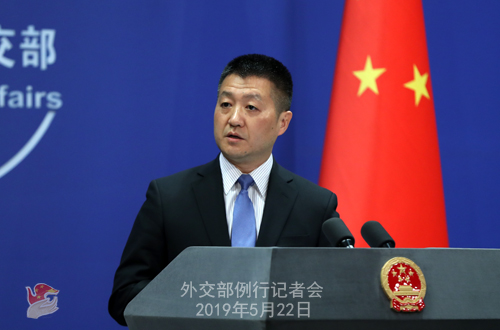 China again denied claims that its loan policies put African nations and others in the developing world into “debt traps,” countering reports that United States legislators are looking to pass legislation that would limit China’s ability to do so.

Ministry of Foreign Affairs spokesman Lu Kang said Wednesday that Beijing’s interests in Africa, and through the Belt and Road Initiative more broadly, are supported by African leaders themselves.

“President Geingob of Namibia recently said in an interview that Chinese loans, most of which are interest free, only account for 2.6 percent of Namibian government’s debt,” Lu said. “The loan agreements were reached through equal consultations with no political strings attached.”

Lu was referring to a September 2018 interview with Geingob and Namibian finance minister Calle Schlettwein, who defended Chinese loans in Namibia as essential for economic growth.

Lu also said Chinese investment is “not limited to mega projects such as airports and roads, but also covers important livelihood projects in education, health and agriculture,” while making a pointed reminder of Namibia’s painful history of colonization.

“President Nyusi of Mozambique also said that it is those who keep lecturing on the debt issue, not China, that caused the debt problem in Africa,” he added. “President Guelleh of Djibouti said that those criticizing the BRI have neither plans nor actions. Our confidence in the (Belt and Road Initiative) and trust in China and Africa-China cooperation will not waiver because of the groundless accusations.”

Lu’s remarks come ahead of a state visit for President Mahamadou Issoufou of Niger, who will travel to Beijing and meet with Chinese President Xi Jinping beginning Sunday.