Home>LEADERS & COMPANIES>Global governance at heart of Kofi Annan conference
By AT editor - 31 May 2019 at 6:59 pm 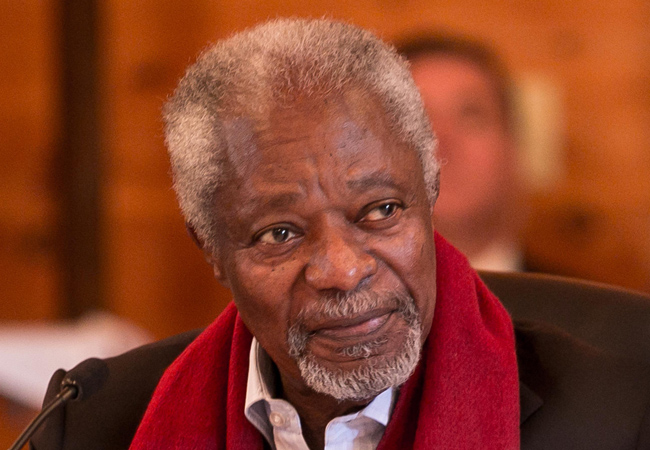 A two-day conference on the legacy of Kofi Annan of Ghana, the former United Nations secretary general who died last year, promises to place African affairs at the center of the conversation.

The sessions begin Monday at Chatham House in the UK, with prominent leaders including Kenyan Raila Odinga, representing the African Union, and South African-born Kumi Naidoo of Amnesty International participating in the discussions on global governance.

Comfort Ero, the Nairobi-based head of the Africa Program for International Crisis Group, will serve on a panel focused on international peacekeeping efforts, as will Algerian Lakhdar Brahimi, a former UN diplomat and minister of foreign affairs serving with The Elders organization.

The main session on Monday evening is open to the public and features Nigerian Amina Mohammed, the UN deputy secretary general, among the speakers focused on Annan’s life and legacy.

Dr. Robin Niblett, the director of Chatham House, said Friday the conference comes at a time when Annan’s vision of global unity in meeting the worlds many challenges is threatened by the unilateralism of nations like the United States and the clashes between major world powers including China.

Niblett noted that U.S. President Donald Trump will visit the UK at the same time as the conference, and while it wasn’t planned that way, the proximity of the two events adds to the contrast between them.

“America’s purposeful disengagement from and disruption of the multilateral institutions that it helped establish during the 20th century is a major factor” in the global shift away from multilateral approaches, Niblett said. “The principal difference with the Cold War is that China’s rise might divide America from its allies rather than unite them.”

China, meanwhile, is advancing the cause of states over individual human rights. “China has not only supported the world’s most repressive regimes, like North Korea, Venezuela and Zimbabwe, but also corrupt and opaque practices in countries in southeast Asia and Africa,” he added. “And it is offering new digital surveillance tools that leaders in these countries can use to suppress popular dissent.”

Annan, awarded a Nobel Peace Prize in 2001, stepped down from his UN position in 2007. He continued to pursue the cause of peace as chairman of his foundation, and as leader of The Elders, the group of global leaders founded by Nelson Mandela and launched that same year, before his August 2018 death in Switzerland.

Mary Robinson, the current Elders chairwoman and former president of Ireland, also will participate in the Annan conference. It is supported by the Bill and Melinda Gates Foundation and will be livestreamed at the Chatham House link here.