Home>Finance & Economics>In the UK, Togo's Gnassingbé makes case for investment
By AT editor - 7 June 2019 at 2:24 am 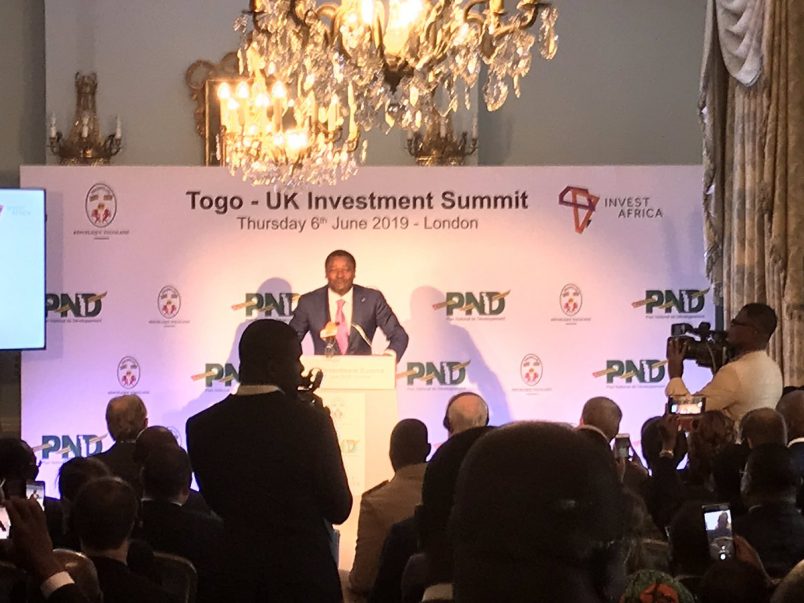 Gnassingbé made his pitch to investors while announcing a new deal for a logistics hub in Lomé, after meeting with CEO Geoffrey White of Agility Africa, right, and signing letters of intent with key company officials. “It testifies to the vitality of the economic diplomacy of the Head of State and already illustrates the first tangible repercussions of his trip to London,” the presidency said in a statement.

Blair has worked closely with Togo through economic development consulting as Togo implements its National Development Plan (PND). Establishing the port at Lomé as a logistics hub on the Gulf of Guinea is a priority of the plan.

“This is a place that I think when you go and visit and get familiar with what the government’s trying to do,” Blair said, “and also the people of Togo themselves, I think you’ll be as excited as we have been to work there.”

Gnassingbé’s three-day visit to London also took him to the Invest Africa Annual Debate, where he showcased Togo’s PND plan and presented opportunities and incentives to investors. A previous stop took him to Chatham House, where he discussed West African security challenges.

Gnassingbé encountered protesters at Chatham House, a reminder that Togo’s opposition continues to press for his removal. Gnassingbé has led Togo since 2005 following the death of his father. The Gnassingbé family has remained in power since 1967.

The president’s London visit comes ahead of a Togo-European Union Economic Forum that begins June 13 in Lomé.