Home>News>Egypt joins Algeria, Tunisia in pressing for Libyan ceasefire
By AT editor - 13 June 2019 at 10:04 am 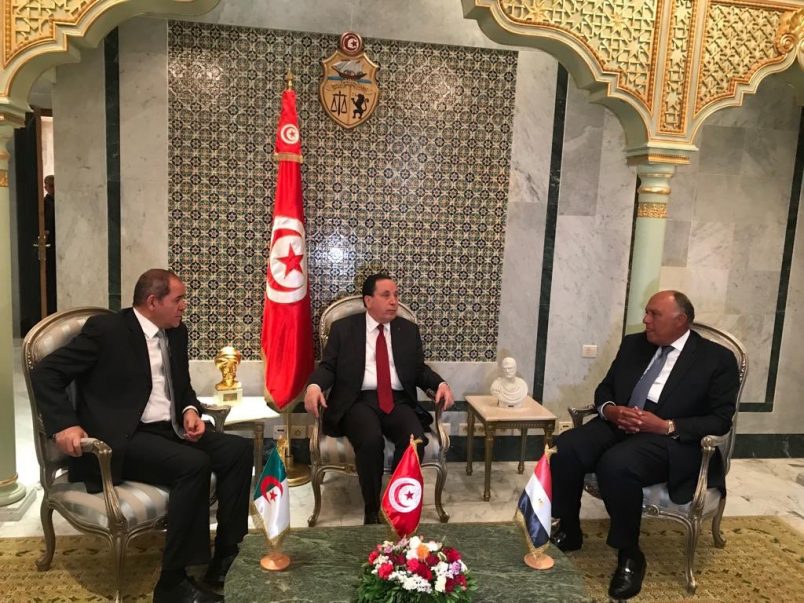 On the question of Libya, Egyptian Foreign Minister Sameh Shoukry met with his Tunisian and Algerian counterparts Wednesday to discuss the crisis, agreeing to press for a ceasefire and advance the cause of a Libyan political agreement jeopardized by the fighting in Tripoli.

Shoukry, Tunisian Khemaies Jhinaoui and Algeria’s Ramtane Lamamra issued a joint statement expressing concern over, among other things, weapons flowing into the country in violation of United Nations Security Council resolutions. That’s been an ongoing international concern, and a priority of Ghassan Salamé, the UN special representative to Libya and head of the UNSMIL mission there.

The Egyptian ministry said in its statement that Shoukry stressed the importance of a united front in pressing Libya to return to its national dialogue process and the now-tabled plan for elections. That process was to begin in April but was upended when Khalifa Haftar and the Libyan National Army, based in the nation’s east, moved to take Tripoli on April 4.

“Shoukry also affirmed the need for the international community to shoulder its responsibility in addressing violations of the Security Council resolutions, especially the attempts by known parties to provide political, ideological and logistical support of weapons and equipment for terrorist organizations,” the MFA said, “thereby further entrenching the militias’ chaos and depriving the Libyan people of its own control over its fortunes and resources.”

Egypt is often seen to support Haftar in his opposition to the internationally recognized Government of National Accord, based in Tripoli and led by Fayez Al-Sarraj, but it appears to equally insist on the ceasefire and an end to fighting that has claimed at least 653 lives.

Forty-one of them are civilians, according to the World Health Organization, while there are six fatalities among health care workers. More than 3,500 people have been injured.