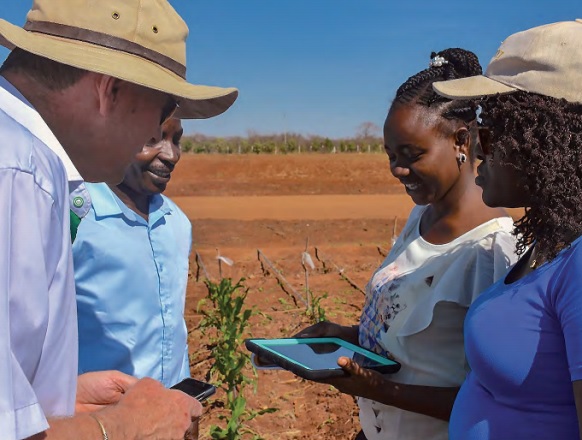 From the agricultural use of drones in Mozambique to solar irrigation systems in Niger, the African continent is embracing digital technologies to boost its food productivity and profitably – and that only becomes a more critical goal as young populations grow across the coming decades.

That’s one reason why youth is at the center of a recent report from the Malabo Montpellier Panel. The 17-member panel is made up of African experts, along with a few Europeans and an Indian, and led by Ousmane Badiane of Senegal and Joachim von Braun of Germany.

Food security and agricultural production are its core mission, and the “Byte by Byte” report advances an understanding of how information and communications technology (ICT) applications can transform the future of African farming. That’s especially critical in an era of climate change, which some experts warn is already threatening the gains in eradicating hunger and extreme poverty made in recent years.

A separate study released at the end of May suggests that’s the case. Scientists from Denmark and the United States looked at production of top world crops – barley, cassava, maize, rice, oil palm, rapeseed, sorghum, sugarcane, soybean and wheat – and found that “projected” impacts aren’t all in the future.

Some of those impacts are visible now. South Africa has seen a 12 percent reduction in the calories these crops provide; Zimbabwe has seen a 10 percent drop, the PLOS study said, and Ghana saw an 8 percent loss. There are many variables among crops, and some regions see improved yields – cassava in particular – but on balance there’s an annual 1.4 percent loss in the crops, or 0.8 percent in total diet calories, across sub-Saharan nations.

Growing season temperatures have already risen at least 0.5°C since the 1970s, and sub-Saharan Africa is among regions with decreased yields linked to climate change. Add in other climate factors such as severe storms, and the land and water use pressures so often linked to communal conflict, and it becomes clear that adopting digital solutions in Africa’s agricultural sector is critical to meeting the needs of growing urban cores like Lagos as well as rural communities. At the same time, it meets the parallel demand for good jobs among African youth.

“Farm management applications can give farmers an overview of their farm processes at the touch of a button, and expedite decision-making as a result,” the Byte by Byte authors said. “At the other end of the scale, more complex technologies and platforms are redefining how stakeholders along the value chain and across public, private and civil society sectors work together to transform the whole sector.”

About 60 percent of total employment across Africa is in the agricultural sector, and that’s higher when considering all of the jobs adjacent to farming in the value chain. The Malabo Montpellier Panel authors note that in Ethiopia, Malawi, Mozambique, Tanzania, Uganda and Zambia, the food system is projected to add more jobs between 2010 and 2025 than the rest of the economy.

“Yet young people show little or no interest in pursuing employment opportunities in the agriculture sector,” they add. “However, digital technologies are rapidly changing the agriculture employment landscape, creating jobs that require a new set of skills and that are more profitable and appealing to the youth.”

Between 10 and 12 million young Africans are expected to enter the work force each year for the next decade, and while much has been made of the potential of Africa’s “demographic dividend,” that only becomes a reality if there are opportunities to match the demands of its well-educated young people.

Without them, the brain drain problem – alongside the migration crisis – will continue to sap the continent’s strength at a time of critical challenges in places where innovation is needed most. Yet for young Africans seeking opportunity in the tech sector, working in agriculture will become intertwined with sophisticated weather forecasting and messaging, unmanned aerial monitoring and fintech service.

That means a significant number of jobs available in agriculture tied to tech, but it also means there are developing areas that don’t have anything to do with working in the fields. “The entrepreneurial spirit of Africa’s youth visible in many parts of the continent reflects how Africa is becoming innovative in finding locally relevant solutions to daily challenges in agriculture, health and education,” the Byte by Byte authors note. Case studies from Ghana, Rwanda and elsewhere illustrate the tech advances under way.

In Kenya, the FarmDrive startup is an example of how data-driven assessments are used to make it easier for creditworthy farmers to get much-needed loans. In the four years FarmDrive has been up and running – through October 2018 – more than $300,000 in loans has been made available to smallholder farmers. At least 37 percent of those farmers were young Kenyans eager to benefit from technology.