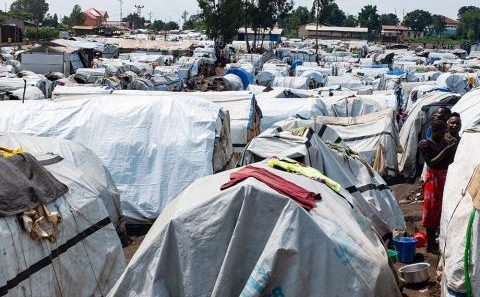 Renewed violence in the Ituri province of the Democratic Republic of Congo (DRC) is forcing mass displacement from a region where authorities are struggling to contain the Ebola outbreak.

Congolese President Felix Tshisekedi, who visited the area recently, estimated that some 400,000 persons are displaced throughout Ituri Province.  The International Organization for Migration (IOM) says it has seen a spike in Djugu, where 20,000 people newly displaced in June reflect a 135 percent increase in the number fleeing for safety and registering at a dozen IOM sites.

The security situation in Djugu and Mahagi territories has deteriorated because of communal violence between Lendu and Hema groups, and conflict between armed groups and Congolese forces.

“The people who fled the frontline of the conflict are living in dire conditions,” said Fabien Sambussy, IOM Chief of Mission in DRC, in a statement released Friday.

IOM echoed the concerns of Doctors Without Borders (MSF), which said last week that the conditions in Ituri severely increase the risk of Ebola but humanitarian aid workers are also seeing measles, malaria and cholera spread.

Many people are seeking assistance in Bunia, where four people have died from the Ebola virus and more are being treated. About 10 percent of the 2,382 cases in the ongoing Ebola outbreak are in Ituri, with the majority in neighboring North Kivu province. The death toll stood at 1,606 on Thursday, according to the Congolese Ministry of Health.

The current plan is to move the IDPs to a 120,000 square meter site owned by the Roman Catholic diocese in Bunia, and away from the overcrowded location near the Bunia Ebola treatment center.

Authorities remain concerned over the spread of the disease into neighboring provinces and countries including Uganda, and now South Sudan after a confirmed case was recorded close to that country’s border.