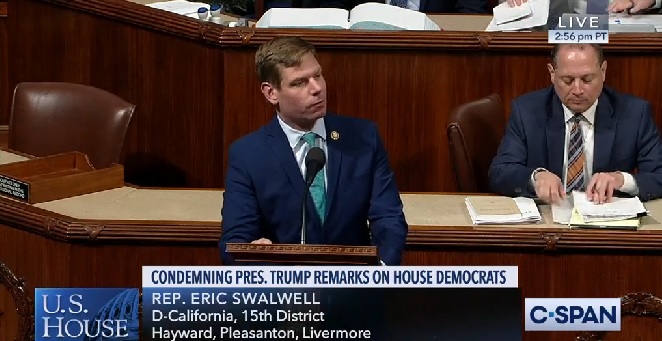 Things got heated late Tuesday in the United States Congress, all because of a derogatory remark about African nations attributed to U.S. President Donald Trump more than a year ago.

Rep. Eric Swalwell, a Democrat from California and briefly a 2020 U.S. presidential candidate, was speaking on the legislature floor when he began reciting a litany of Trump incidents and quotes that Swalwell called racist. He brought up the controversial January 2018 comments Trump made on immigration in which, according to some present, he called African nations “shithole” countries.

As Swalwell continued, however, some Republican lawmakers began shouting for order because of the profanity used, they said. The word violated the rules of decorum in the U.S. House.

Swalwell, however, began shouting back at Rep. Doug Collins of Georgia and others interrupting him as the chairwoman banged the gavel and told Swalwell he was out of order.

“I quoted President Trump calling African countries ‘shithole countries’ on the House floor,” Swalwell explained. “Collins formally objected to the parliamentarian that saying ‘shithole’ is vulgar. He’s right. So why won’t he and the (House Republicans) object to Trump saying it?”

Some in the chamber shouted “They’re Trump’s words!” as the calls for order continued.

The sparring came during condemnation of Trump’s political attacks targeting four women of color who are Democrats in the U.S. House, including Somali-American Rep. Ilhan Omar of Minnesota.

It preceded the successful vote on a resolution to condemn Trump’s racist remarks.