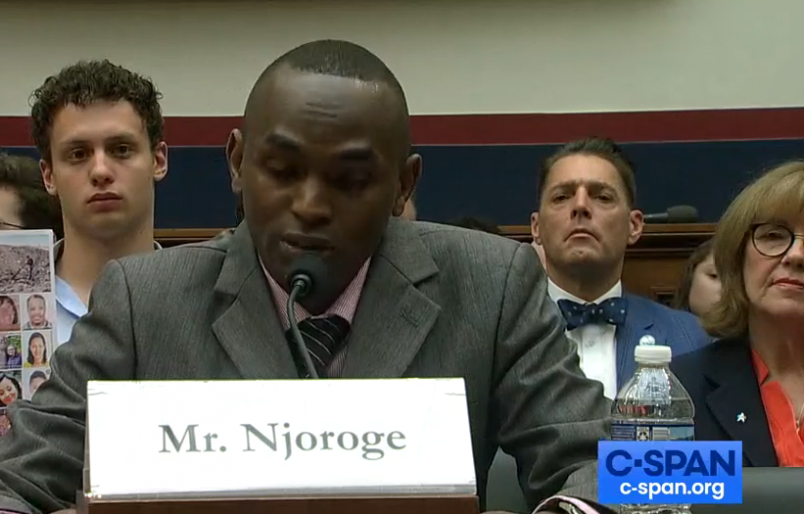 The father of three children who died aboard Ethiopian Airlines Flight ET302, in a March 2019 crash that also claimed his wife and her mother, testified before a U.S. legislative committee hearing on aviation safety on Wednesday in Washington.

Paul Njoroge, a Kenyan living in Canada, described the lives that were lost in his family, including a 4-year-old who loved singing, a boy who wanted to become an astronaut, a retired career teacher, and a vibrant homemaker and community activist who promoted education in marginalized communities.

“I think about their last six minutes a lot,” he said. “My wife and my mother-in-law knew they were going to die. They had to somehow comfort the children during those final moments knowing they were all lost. I wish I was there with them.”

Members of the hearing committee appeared deeply moved by Njoroge’s grief as he shifted into harsh criticism of Boeing, the maker of the flawed 737 800MAX aircraft series, and called their initial deflection of responsibility “an insult to humanity” in the service of protecting profits.

He is among many affected families who have filed lawsuits against Boeing following the crash of ET302 as well as Indonesia’s Lion Air Flight 610 crash last year. Both accidents are linked to problems with the Maneuvering Characteristics Augmentation System (MCAS), an autopilot software system that pilots in both crashes had little time to override and were unable to achieve.

The accidents led to the grounding of all 737 800MAX aircraft until the problem is fixed.

Boeing, which has apologized for the crashes, said Wednesday it is committing US$50 million, half of a previously announced total sum, to relief for victim families.

“The tragic loss of life in both accidents continues to weigh heavily on all of us at Boeing, and we have the utmost sympathy for the loved ones of those on board,” said CEO Dennis Muilenburg in a statement. “We hope affected families receive needed assistance as quickly and efficiently as possible.”