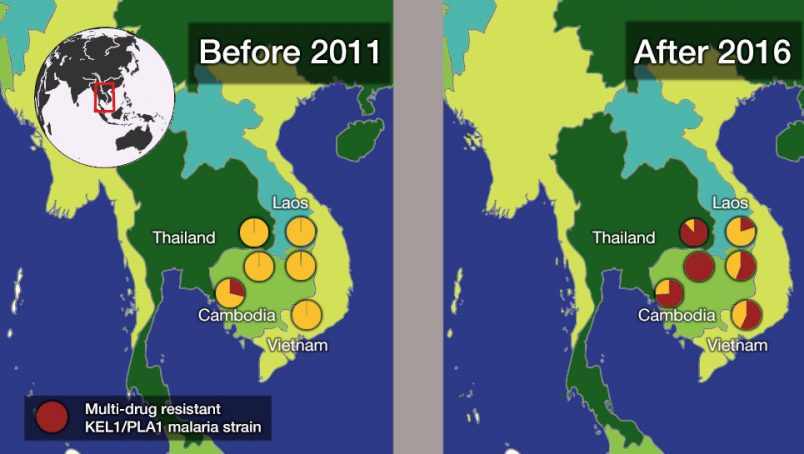 Resistance to malaria treatment drugs that began with a strain of malaria in Cambodia has quickly spread to other Southeast Asian nations, according to authors of a new study that may have implications for the African continent.

The researchers from the Wellcome Sanger Institute, University of Oxford, and Thailand’s Mahidol University found that later generations of a multidrug-resistant malaria strain replaced local parasite populations in Vietnam, Laos and northern Thailand – and continued to acquire new genetic changes.

Researchers found that this strain, called KEL1/PLA1, spread across Cambodia in six years’ time. What they learned while studying the DNA of parasites, taken from malaria patient blood samples across a 10-year period ending in 2018, is that the situation became much worse after 2013. They published the findings of their work in The Lancet Infectious Diseases this week.

“Our study provides a clear picture of how malaria that is resistant to the first-line treatment is spreading, and demonstrates the importance of using genetics to detect patterns of resistance in each area,” said senior study author Dr. Dominic Kwiatkowski, of the Wellcome Sanger Institute and the Big Data Institute at Oxford. “Active genomic surveillance is now vital to inform national malaria control programs, to help reduce the risk of a major global outbreak.”

The World Health Organization says an estimated 435,000 people died of malaria in 2017 and 93 percent of them were in sub-Saharan Africa. Nigeria, Democratic Republic of Congo, Mozambique, Uganda and India accounted for nearly half of the world’s cases.

A WHO report in 2017 found that the fight against malaria was already compromised by resistance to insecticides used to control mosquitoes that spread the disease, especially in Africa and Eastern Mediterranean regions.