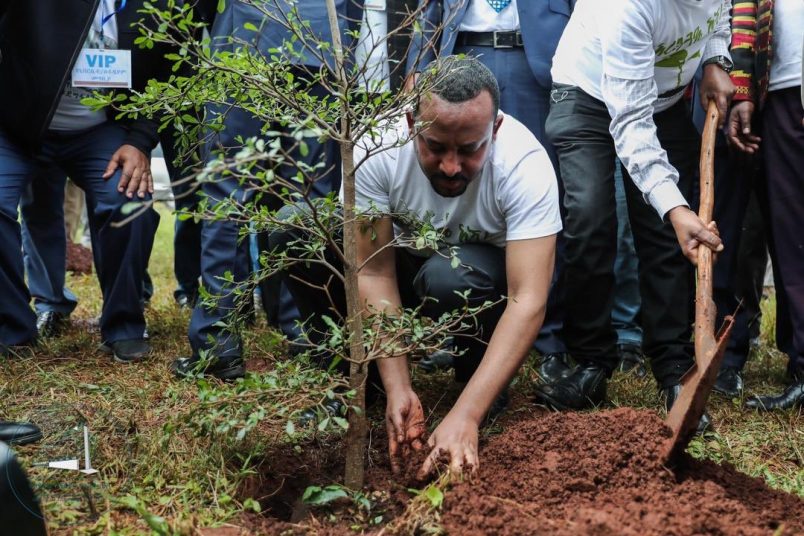 Ethiopians from all walks of life turned out Monday to plant trees in a national quest to counter the climate consequences of deforestation, while aiming for a new Guinness World Record with a goal of 200 million planted trees.

The Green Legacy project, an initiative of Prime Minister Abiy Ahmed, aims to surpass India as the official tree planting record-holder. Ethiopia says it surpassed the goal with 353,633,660 trees planted during the 12-hour window, according to a tally from the Ethiopian Ministry of Innovation and Technology.

Abiy planted a number of trees himself during appearances that included stops in Arba Minch and Wolaita Sodo. He was joined by Ethiopians across the country, many seen walking in groups together carrying their tree seedlings down the road or participating in related community events.

Ethiopian Airlines and other government and corporate entities joined in the effort. “Environmental sustainability is one of our corporate philosophies,” said the airlines, proudly sharing images of its leaders planting trees near display aircraft.

Other countries participated too, with their diplomatic missions and NGO leaders planting trees alongside the Ethiopians. More than 400 people from the United Nations Environment Program planted trees, as did the UK embassy staff.

Canadians headed to Gulele Botanic Garden in Addis Ababa to plant their trees, as did their diplomatic counterparts from Sweden. Israel’s ambassador proudly planted an avocado tree, while the umbrella-toting Belgians planted trees in the rain around their embassy compound.

Abiy has called for the planting of billions of trees in the fight against climate change, building on the legacy of efforts to halt desertification on the continent in support of a sustainable future.