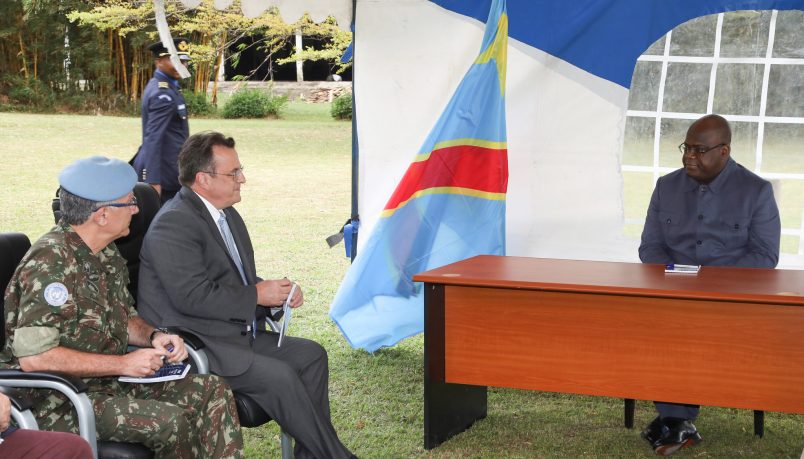 In Zimbabwe, crisis is in the air again. Two years after the country’s long-time ruler Robert Mugabe was ousted in a military coup, a crippling energy crisis forces people to live by candlelight as the economy is lurching back towards hyper-inflationary territory. After years of turmoil under Robert Mugabe, the country must have thought it had left all this behind.

Sadly, Zimbabwe’s is far from an isolated case. Across Africa, a new cast of leaders have emerged from the old kleptocracies, pledging to eradicate the corruption and embrace a modern, democratic future. But each of them is struggling against the weight of history, and a culture of ruthless graft which has percolated every corner of society. Their failures and successes depend on their genuine wishes to make a change, which either pushes them to implement real reforms – or continue as before.

Kabila is still calling the shots

In the Democratic Republic of Congo (DRC), to take one particularly unfortunate example, December’s elections were supposed to mark a new dawn – the first peaceful handover of power since independence in 1960. Strongman Joseph Kabila had finally stood down after 17 years in charge.

Kabila had ruled DRC with an iron fist, jailing and torturing anyone who dared to protest. He’d even defied the country’s constitution by staying on at the end of his second term and refusing to relinquish power for a further two years. Squandering the DRC’s vast mineral resources, Kabila also allowed his cronies to siphon billions of dollars from the copper mines while DRC’s vast oil reserves were left undeveloped, because Kabila feared the revenues would fall into the hands of his political opponents.

But last year’s elections have not delivered the revolution that millions were hoping for. Kabila’s coalition still controls both houses of parliament, and it appears he’s got a patsy in the president’s office, too. Ever since the election results were announced, it’s been reported that the data was rigged to thwart the real winner, hardline Kabila hawk Martin Fayulu. Voter intimidation notwithstanding, the regime in the end simply fabricated the electronic voting records. As one official boasted in a leaked email, “we can always cheat.”

Instead of Fayulu, Kabila was replaced by the more moderate – and malleable – Felix Tshisekedi. Far from sweeping away the old regime, Tshisekedi swiftly appointed Kabila ally Sylvestre Ilunga as prime minister, and divided up the Congolese cabinet with Kabila’s coalition. Kabila will control the prestigious defence, finance and justice ministries, as well as the office which oversees DRC’s mining companies – the very key to the DRC’s prosperity.

A change of pace in Senegal

In Senegal, the story starts with the same headaches but with a happy end. Between 2000 and 2012 the country was ruled by Abdoulaye Wade who tried to swerve his own constitution by clinging to power when his time was up, and arrested anyone who complained.

Just like Kabila, Wade enriched himself at his country’s expense, once spending $1.6 million on hotel rooms while floods were leaving 250,000 Senegalese homeless. He also allowed his son, Abdoulaye, to take a huge stake in the Senegalese economy by holding four ministerial portfolios at once, and censored the anti-corruption watchdog he himself had created challenged government contracts negotiated by Wade Junior’s friends.

Wade left quite a ruinous legacy, even if his regime can take credit for some improvements, notably a rise in children attending primary school. Yet he oversaw a drastic rise in unemployment and allowed bribes to remain a regular feature of daily life. A huge ‘African renaissance’ statue, glowering down over Dakar’s impoverished shacks, stands as testament to his negligent folly.

However, at least the transition to a new government in 2012 has brought notable improvements over the Wade years. Wade’s successor Macky Sall emerged victorious on a promise for change, pushing an ambitious infrastructure program which has propelled economic growth to 6%, among the highest in Africa. A universal healthcare system has been mapped out, while a new agriculture programme promises to improve nutrition levels.

Though progress is uneven across various sectors, Sall’s willingness to fight graft appears genuine. The beefed-up anti-corruption body, coupled with more rigorous asset-disclosure rules for public officials, has restored some measure of confidence among the global business community, which under Wade had come to regard Senegal as an African Wild West.

Unfortunately, progress is less evident elsewhere, as the people of Zimbabwe can attest. Mugabe’s reign is remembered primarily for the murder and imprisonment of his opponents, yet his economic mismanagement has left an equally toxic stain. His redistribution of white-owned farms among his cronies, coupled with his eagerness to plunder the profits from Zimbabwe’s diamond mines, brought the country’s economy to a standstill, pushing unemployment up to 80% and triggering the hyperinflation crisis a decade ago.

So far Mugabe’s successor, Emmerson Mnangagwa, has shown little sign of arresting the slide. Analysts describe his regime as a series of half-baked policy measures, such as the decision to ban foreign currencies. Mnangagwa has at least appointed a brand-new anti-corruption commission, though given that he was one of Mugabe’s closest allies for decades, it’s unlikely to work as intended.

Indeed, across Africa, people would be forgiven for believing the promises of change when they see it. After years of being exploited by greedy leaders, forced to foot the bill for ludicrous vanity projects, Africa deserves the sort of clean, open government which is taken for granted elsewhere in the world. Some notable exceptions aside, whether its new leaders can deliver is a different matter altogether.