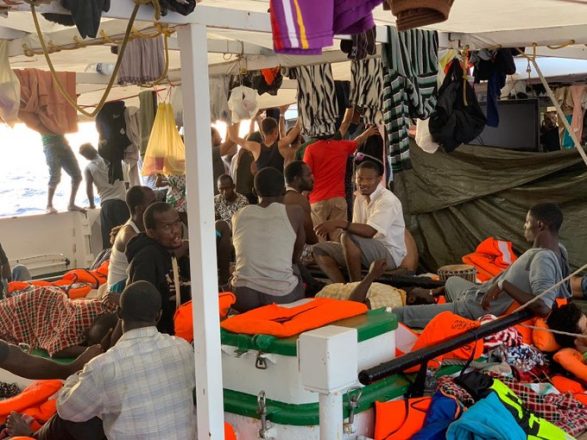 Unaccompanied minors aboard the Spanish sea rescue ship Open Arms were permitted to disembark at the Italian port of Lampedusa on Saturday, one day after the head of the rescue organization warned the situation aboard the ship – where migrants have been trapped for two weeks – was rapidly deteriorating.

The Italian Coast Guard agreed to evacuate the 27 people following approval from Interior Minister Matteo Salvini, a hardline anti-immigrant politician who made clear the decision was not his own. It underscored divisions in Italy over the country’s rejection of Mediterranean Sea migrant arrivals and stiff penalties for rescue agencies seeking to save them.

The Open Arms ship originally picked up about 150 migrants, almost all of whom who have been refused disembarkation since August 1. Italian news agency ANSA reported Friday that conditions on the ship had become dire, describing a medical and humanitarian emergency confirmed by an Italian physician but scoffed at by Salvini.

Oscar Camps, the founder of Open Arms, said 107 migrants and 19 crew members trapped aboard the ship continued to suffer. “The situation worsens every minute,” said Camps. “We are witnessing the deterioration of the physical and mental health of the people on board and, given the extreme situation, we urgently request a humanitarian landing in the port of Lampedusa.”

David Sassoli, the President of the European Parliament, said the situation was dramatic and urged Italy to allow the Open Arms ship into port. “They are now giving up and are inflicting acts of self-harm, while they lose sense of reality,” said Sassoli on Friday. “The hygiene conditions on board are worse than ever and it is necessary to allow an immediate disembarkation of those on board.”

The migrants are among an estimated 500 currently stranded on the Mediterranean.