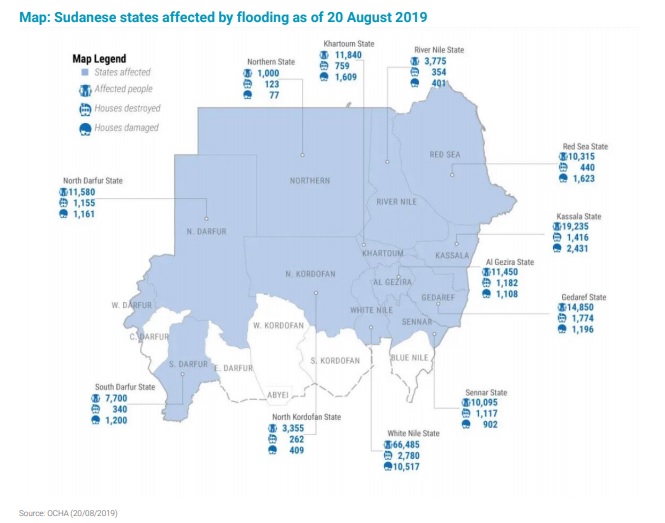 Floods in Sudan have claimed at least 54 lives so far this rainy season, with impacts in almost all of the 18 states in the country.

Most of the fatalities have occurred when the roofs of homes collapsed or people were electrocuted.

The heavy rains that began August 13 have affected nearly 200,000 people, according to the Sudanese Humanitarian Aid Commission (HAC). Thousands of homes have been destroyed, along with schools, hospitals, mosques and other facilities.

The White Nile province has been hit the hardest, with flood waters impacting at least 34,500 homes and twice as many people, the United Nations humanitarian aid organization UNOCHA said.

“As assessments are still ongoing, these numbers represent merely an estimate of the impact on the assessed regions,” said humanitarian aid support agency ACAPS. “Furthermore, it is unclear what the HAC means by the term ‘affected.’ Numbers of people displaced by the floods have not been reported.”

Sudan’s rainy season will continue through September with above average rains in the forecast and the likelihood of additional flash flooding. That may mean more fatalities, with aid agencies especially concerned over the well-being of South Sudanese refugees and internally displaced people from Sudan.

The floods also killed massive amounts of livestock, adding to concern over the economic and food security impacts in Sudan.