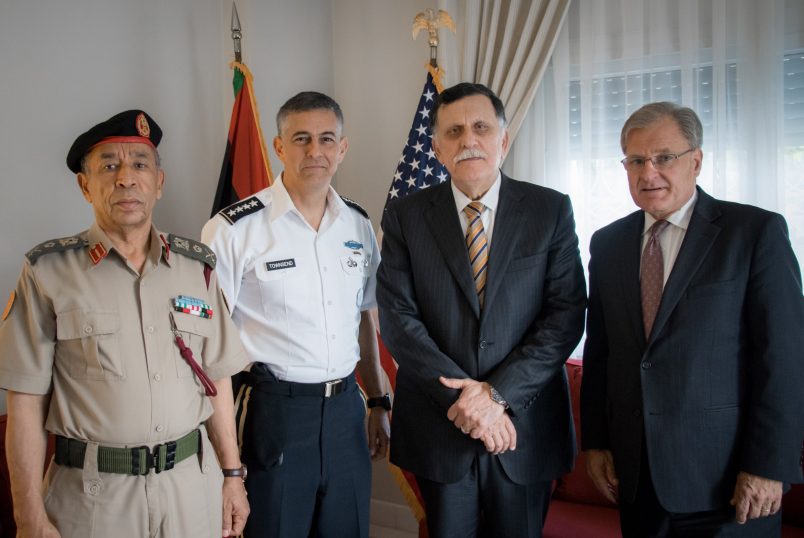 The new commander for the United States Africa Command (AFRICOM) traveled to Tunis this week to meet with Libyan leader Fayez al-Sarraj, the head of Libya’s internationally recognized Government of National Accord (GNA).

U.S. Army Gen. Stephen Townsend, who replaced Marine Corps Gen. Thomas D. Waldhauser at the end of July, focused on the security situation in Libya as conflict between the GNA and forces aligned with Khalifa Haftar and the Libyan National Army continues over Tripoli.

“Topics of discussion included the security environment, the importance of addressing the existing violent extremist organization threat, and the need to resolve the conflict in Libya,” said AFRICOM in a statement.

Townsend was accompanied by Richard Norland, the new U.S. ambassador to Libya. He pressed the need for a diplomatic solution to end the crisis in Libya, which has seen a resurgence of Islamic State activity in recent months.

“We are committed to open and transparent dialogue on this urgent security issue,” Townsend said. “We fully support the United Nations, U.S. State Department and the Libya External Office’s efforts to promote stability and shared prosperity in Libya.”

While AFRICOM personnel are not currently located in Libya – they were withdrawn in April as Haftar launched the offensive on Tripoli – Townsend said  the command continues to monitor conditions in Libya and plan a return for U.S. military personnel once the security environment permits doing so.