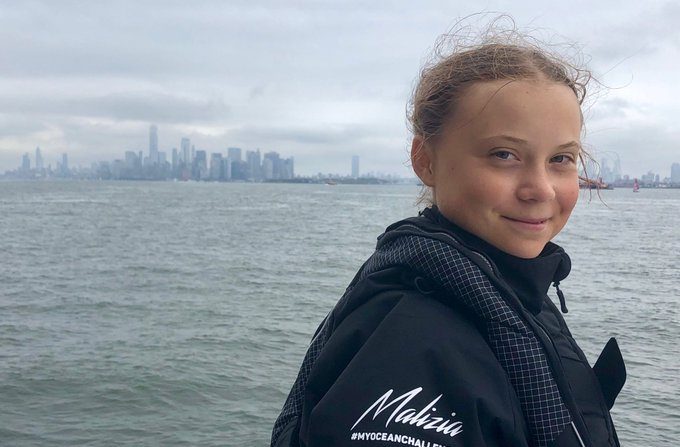 Swedish climate activist Greta Thunberg completed on Wednesday her two-week journey by sea to New York City, where she will participate in the United Nations Climate Summit in September.

Thunberg, the 16-year-old face of climate action since she began her Friday school strikes in her home country, traveled aboard the zero-emissions racing yacht Mazilla II because of her commitment to avoid the climate impacts of flying in airplanes. The yacht is equipped with solar panels and underwater turbines to generate power.

When she arrived, Thunberg was greeted by 17 sailboats in the harbor, sent by the UN to represent each of the Sustainable Development Goals.

“Finally here,” said Thunberg in a Twitter message to her 1.2 million followers. “Thank you everyone who came to see me off in Plymouth, and everyone who welcomed me in New York! Now I’m going to rest for a few days, and on Friday I’m going to participate in the (climate) strike outside the UN.”

She is one of many young activists from Africa and around the globe who are pressing for change, many of whom will participate in the Youth Climate and the Climate Action summits, and she was greeted warmly by key UN personnel.

“Young people around the world are demanding urgent climate action by all leaders,” said Amina Mohammed, the UN Deputy Secretary-General.

“They are leading the kind of transformative change needed to drastically reduce carbon emissions to protect our planet and ensure the wellbeing of people.”