Home>Health>How EOCs can limit the impact of African health disasters
By AT editor - 29 August 2019 at 12:57 am 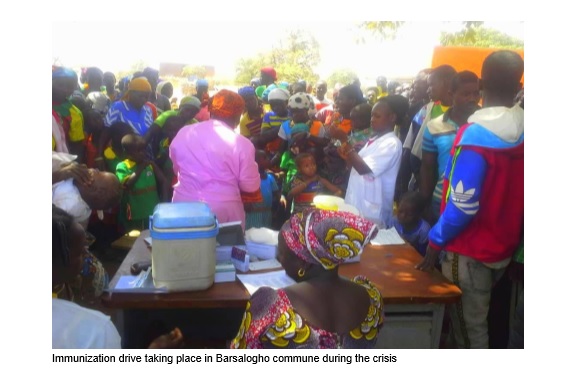 In 2017, a dengue fever outbreak in Burkina Faso resulted in 12,087 cases and 24 deaths, mostly in the central region. Such outbreaks have historically placed a major strain on Burkina Faso’s public health system and recently led to a call for a more coordinated emergency response mechanism.

To this end, the government of Burkina Faso commissioned the creation of a Public Health Emergency Operations Center (EOC) in 2018, to bolster national capacity to detect, prevent and respond to public health emergencies. EOCs lie at the heart of an effective emergency response system, convening actors and centralizing coordination, preparation, operations, data collection and communication.

An EOC can play a major role in preventing a crisis from turning into a full-blown disaster. The 2014-2016 West Africa Ebola outbreak is a good example. The outbreak resulted in over 11,000 deaths primarily in Guinea, Liberia and Sierra Leone, and GDP losses of over $2.2 billion in 2015.

This was in addition to several other socioeconomic losses. Liberia, for example, lost 8 percent of its doctors, nurses and midwives to Ebola while Sierra Leone lost 7 percent of its healthcare workers. Contrast this with the situation in Nigeria, where an EOC was established utilizing systems and public health resources from its polio eradication campaign, and staff from partner organizations.

The Nigerian Rapid Response Teams (RRTs) quickly identified and tested thousands of potential contacts, resulting in a relatively low casualty rate of eight deaths. While there were other factors that prevented Ebola from spreading throughout Nigeria, the presence of a functional and coordinated system certainly was a contributing factor.

Burkina Faso’s EOC, called CORUS, was put to the test less than two weeks after it was inaugurated in December 2018. On New Year’s Eve, a group of terrorists arrived on motorbikes in the village of Yirgou in the northern part of the country. Having killed the chief and five other people in the community, they hastily retreated from the area. While the national and regional security bodies were working on securing the area and bringing peace to the region, a less obvious crisis was developing: the spread of meningitis in affected areas that could lead to a health crisis.

With the mass displacement of close to 15,000 people in conflict-affected areas and camps for the internally displaced people (IDPs), Burkina Faso was experiencing a rise in meningitis cases and other public health threats. Given the high risk of a meningitis outbreak, the Ministry of Health ordered the activation of CORUS on January 14.

The key CORUS tasks included, among other things, determining the needs for drugs, mosquito nets and related equipment, and launching a vaccination campaign against measles and meningitis. According to Dr. Brice Bicaba, the CORUS director, within a few hours they “were able to have a meeting in which we reviewed information on the growing meningitis crisis that had been collected by relevant partners on the ground. Everyone understood the chain of command and our role.”

In daily crisis meetings with Ministry of Health officials and weekly meetings with other partners, such as UNFPA and Médecins Sans Frontières, CORUS constantly assessed the evolving situation, mobilizing the required resources and personnel as needed. This included sending teams wherever needed, deploying more staff to vaccinate people, and strengthening community-based surveillance and contact tracing.

Bicaba estimated it would otherwise take five to seven days for initial meetings to be organized without the CORUS framework, which means losing precious time in stopping an epidemic. Bicaba also credits the immediate access to emergency funds from the Bill & Melinda Gates Foundation that allowed CORUS to immediately deploy a team to the region.

Dr. Herve Hien, director for the National Institute of Public Health (INSP) which houses CORUS, said the immediate support from the Ministry of Health was also a key factor in their success. “The Minister of Health gave us immediate access to officials of the relevant departments (that) we would need for our work. This was in addition to mobilizing the relevant local and regional healthcare workers.”

Despite CORUS’ success in curbing the crisis, it wasn’t all smooth sailing. Leadership transitions in the government before and after the launch of CORUS brought with them a certain level of uncertainty. Fortunately, there were no adverse effects to how CORUS operated even during these transitions.

A model for other nations

It shows that the EOC is carried by an entire system and not a single person. Working as part of the national system was a key success factor for CORUS. Additionally, there were practical challenges on the ground. According to Omar Taparga, the head of communication at CORUS, it was difficult to get people to adhere to certain behavioral changes that would limit the spread of the epidemic.

Many were wary of being vaccinated ,and the flux in the population as people moved around was an added challenge. It was also difficult to keep healthcare workers motivated, given the intense work schedule during the height of the crisis and the obvious fear of insecurity even if the region had been secured for the most part.

The CORUS experience in handling the Yirgou situation is unique in that it was newly established but immediately responded to a health-related emergency taking place against the backdrop of a security crisis.  CORUS was activated for a total of 45 days and was effectively able to pull out at the end of February 2019, declaring the health crisis in the area to be effectively contained. The fact that the team was able to intervene early on in Yirgou was critical to curbing the spread of meningitis.

The CORUS story highlights the importance of having EOCs in other African countries. It shows how they can effectively limit damages, whether in the context of a public health crisis in isolation such as the West Africa Ebola outbreak, manmade issues in Burkina Faso, or a natural disaster like Cyclone Idai, which affected Mozambique, Zimbabwe and Malawi earlier this year.

Finding the right model for a national emergency response system requires careful strategic thinking to address questions around anchoring, mandate, organization, processes and sustainability. To ensure this works, time must be invested in the design stage by working with the chain of actors across the system to understand their current and future roles. The system needs to be resilient in the face of a real emergency. Burkina Faso took the time to establish an emergency response system, which was instrumental in ensuring all the different actors were able to act to effectively tackle the crisis.

Since the 2014-2016 Ebola crisis in West Africa, the Bill and Melinda Gates Foundation (BMGF) and Dalberg Advisors (www.dalberg.com), a strategy consulting firm specialized in building solutions to address development challenges, have jointly supported several West African governments to create or strengthen their EOCs. This includes CORUS in Burkina Faso.