Home>African Future>For African migrants, will Panama become the new Libya?
By Laureen Fagan - 30 August 2019 at 3:57 am 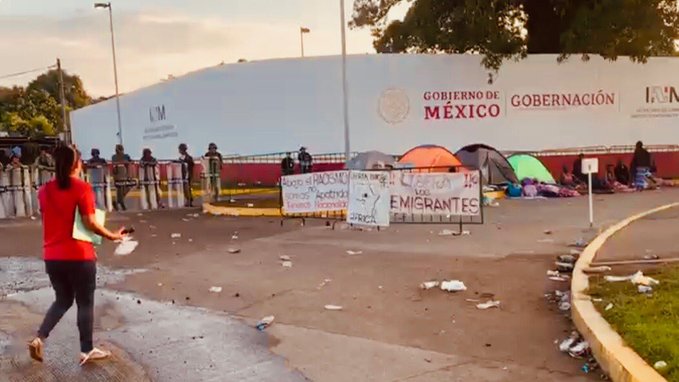 Another 200 migrants were rescued on the Mediterranean Sea on Wednesday, this time as they attempted to make the crossing from Morocco into Spain. These migrants from sub-Saharan countries, traveling in three boats, are the latest in the all-too-familiar story of Africans who travel through Libya and other nations, desperately seeking to reach Europe, even as the European Union crafts policies to prevent them from crossing the sea.

The same principle is at work along the southern border of the United States, where immigration policies and enforcement under President Donald Trump have become increasingly draconian. In recent months, that’s affected African migrants who – finding the Mediterranean routes too dangerous or inaccessible – have turned to the Central American pathways into Mexico in order to reach the U.S. in greater numbers.

While Africans have been choosing this alternative route for several years, they’ve only recently come under more scrutiny. As they encounter new barriers to U.S. entry and become trapped on the Mexican side of the border, they’re also becoming more frustrated and restless. Media and migrant aid groups report clashes between Mexican police and security forces, and the African migrants caught in transit.

“Over the past week, people of African and Haitian origin have staged protests in front of the Siglo XXI migratory station in Tapachula, Chiapas, located on the southern border of Mexico,” said one such organization, the Alianza Americas network for immigration groups, in a blog post on Wednesday.

“The protests follow a change in Mexican immigration policy that has largely fallen under the international radar.”

In the past, if African migrants were passing through Mexico from the southern border, they were issued a temporary permit that allowed them to be in the country for 20 days. The permit protected them from deportation and allowed them to remain legally, long enough to continue travel to the northern border with the U.S. where – despite the difficulty in succeeding – they could make their cases for asylum.

That’s no longer the case, Alianza America explains. The permits they’re getting now will only allow them to seek permission to remain in Mexico, or to leave by the same southern border they crossed when they entered. While the details may be different, it’s essentially the same practice that African migrants experience on their own continent where Europe is off limits, they’re trapped in Libya, or they can go back to Eritrea or Nigeria or The Gambia.

“This is clearly an example of the (Mexican President) López Obrador administration acting as de facto migration police, enforcing the Trump administration’s attempts to limit access to asylum in the United States,” said Alianza Americas. “The African people seeking asylum are very visibly impacted because they are essentially stranded in Chiapas, Mexico, with no access to protections.”

Similar situations are reported in other cities including Tijuana, which is on Mexico’s northern border near the U.S. city of San Diego. Observers say Mexican authorities are targeting the African migrants who, because they are prevented from entering the U.S., have decided to stay in the Mexican city.

“On a recent Saturday in Tijuana, there were 90 Cameroonians lined up to get on a waiting list to request asylum that has swelled to about 7,500 names,” the Associated Press reported in June. “Also on the waiting list are Ethiopians, Eritreans, Mauritanians, Sudanese and Congolese.”

U.S. targets Panama as a chokepoint

On the U.S. side, the latest move from the Trump administration is to try and reach a deal with the nation of Panama wherein “extracontinental” asylum seekers – in other words, Africans and Asians – would be sent back to Panama if they had traveled through the small Central American country in the first place. U.S. officials traveled to Panama last week to discuss the possibility and, according to the Department of Homeland Security, meet with other Central American ministers to advance “efforts to collaborate on regional safety and security.”

There’s a good reason for why it’s Panama, a longtime U.S. ally on the isthmus that connects the North and South American land masses. That’s because African immigrants in particular – from Somalia or Cameroon or Democratic Republic of Congo – are flying into South American nations and then making the trek through the tropical Darién Gap that connects Colombia with Panama and its only route north.

The stories from Darién are often as horrific as those of the African migrants trying to reach Europe or the Gulf states, because human traffickers have the same disregard for them. Migrants are raped or robbed, beaten and killed. Their families are extorted. Their bodies are thrown overboard at the river crossing. They are forced to navigate difficult jungle passages, avoiding the regional armed groups.

Yet for all the attention given to African migrant suffering on the shores of the Mediterranean, little care was given to the plight of Africans trying to reach the U.S. At least, not until their numbers began to shoot up as they have this year, and U.S. officials found themselves relocating those who entered to places like the U.S. states of Texas or even the Canadian-border state of Maine, where some 300 people – many of them Congolese – are living.

Now the U.S., caught in the grip of Trump’s anti-immigration priorities, wants to seal off the route that brings so many Africans to its doorstep. Advocates of the xenophobic approach warn of the African invasion, the same way they have amplified fears of the Salvadoran or Honduran one.

Mexico already appears to be on board with the Trump “third country” approach. Next it may well be Panama that becomes the new Libya, an African migrant holding cell outsourced by the Global North, and the world already knows what will happen next.