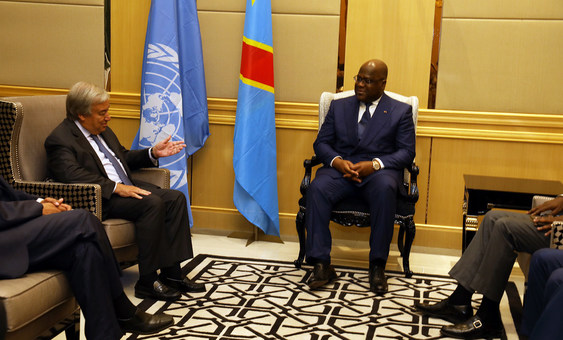 United Nations Secretary General António Guterres completed a three-day visit to Democratic Republic of Congo with expressions of confidence in the newly formed government and optimism that President Felix Tshisekedi and the country will meet their significant challenges.

The Congolese will see “a government that wants to transform the country, an opposition that also plays an important role in political life, with greater respect for human rights and with a vision for the future of Congo,” said Guterres as he wrapped up his visit in Kinshasa on Monday.

Guterres reaffirmed the UN’s support of MONUSCO, the peacekeeping mission in DR Congo, and said it will continue cooperating with Congolese security forces and targeting armed groups operating within the country.

That’s especially critical in the eastern provinces of the country facing the ongoing Ebola outbreak, which has claimed more than 2,000 lives since last year. The region has known conflict for years but the UN presence has become key in recent months as the Ebola response continues.

Guterres also asked armed groups to lay aside their weapons, and join a disarmament and community reintegration process that the UN vows it will do more to support.

The UN’s ultimate goal, he said, is for MONUSCO to no longer be necessary but he assured the nation that the UN will stay engaged and never abandon the Congolese people.