Home>News>Ramaphosa appeals for calm in address to nation
By AT editor - 5 September 2019 at 9:10 pm 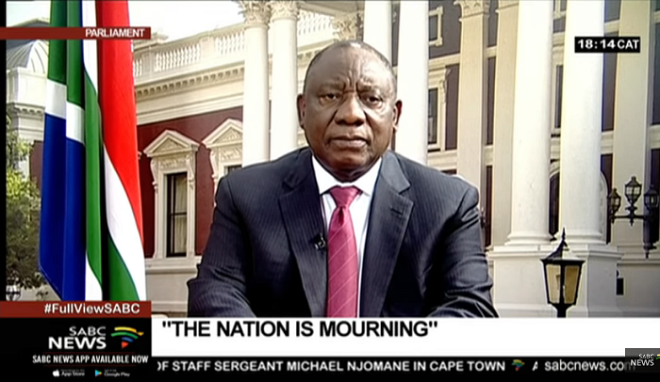 President Cyril Ramaphosa took to the airwaves Thursday evening to deliver another message on South Africa’s escalating violence over migrants, which has claimed at least 10 lives and led to the arrest of more than 400 people.

It’s also started to spread to other nations, with Nigeria reporting attacks on South Africans in retaliation, and African leaders condemning the xenophobic violence in Johannesburg, Pretoria and beyond that has fueled the current crisis.

Ramaphosa, who has been pleading for peace all week, again stressed that South Africa’s attacks on foreigners conflict with the country’s democratic vision, but he also focused on attacks against women as thousands of marchers took to the streets in protest.

They are calling for a national strike on Friday, as a series of women’s deaths – most recently, that of a Cape Town student who disappeared while running an errand – has jarred the nation in the middle of its economic crisis and clashes over foreign workers.

Ramaphosa responded with a list of interventions planned to protect women but placed the violence within the broader context playing out in South Africa. He said 444 people have been arrested, and assured the nation that the violence against migrants has largely subsided and security forces remain vigilant.

“Our nation is in mourning and pain,” said Ramaphosa. “These acts of violence have made us doubt the very foundation of our democratic society, our commitment to human rights and human dignity, to equality, to peace and to justice.”

Ramaphosa asked citizens to avoid being provoked by “those who want to sow mistrust and fuel conflict” on social media.

“This is a time for calm,” he added. “It is a time for all of us who live in this country to confront our challenges directly and earnestly, not through violence, but through dialogue.”