Home>News>Official: Bahamas storm damage more like a tsunami disaster
By AT editor - 7 September 2019 at 11:55 pm 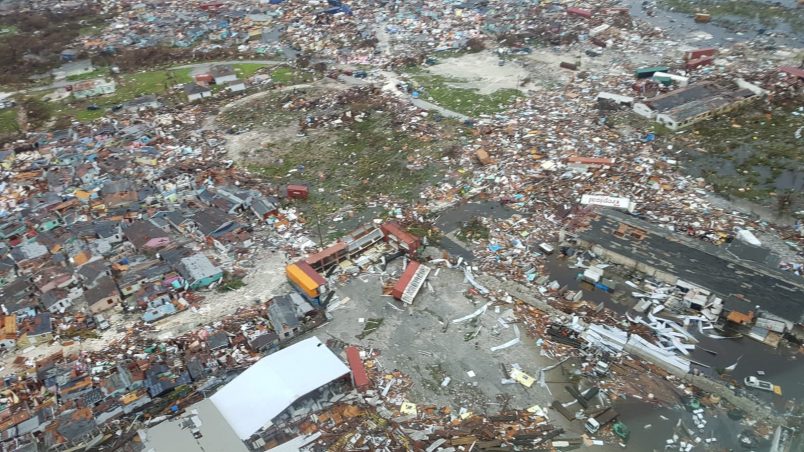 The death toll continues to rise in the Bahamas, where news crews report an increasingly dire situation as survivors of powerful Hurricane Dorian – some six days later – remain trapped on portions of the island nation where the damage has been described as apocalyptic.

Thousands of people are still missing, while the United Nations agency for migration, IOM, warned Friday that because of access barriers there is still limited information about the disaster.

The Category 5 hurricane arrived on the Grand Bahama and Abaco Islands last Sunday morning, with maximum sustained wind speeds of 298 kilometers per hour and gusts reaching beyond an astonishing 354 km/h.

The record-setting storm and its winds, heavy rain and catastrophic storm surge were deadly enough, but then the storm stalled as Dorian remained nearly stationary over Grand Bahama until Tuesday afternoon. Some areas of the affected islands were exposed to the winds for 40 straight hours.

The storm continued on to trace the southeastern United States coast, just clipping the Outer Banks of North Carolina, before racing into Canada late Saturday afternoon with the equivalent of Category 2-strength storm winds.

Yet as the damage done to the Bahamas comes more clearly into view, authorities say the death toll is expected to be sobering and the impacts appear more like those of a tsunami than a tropical storm.

“We certainly expect the death toll to rise, I can’t tell you what that would be, but we’re really worried about it,” said Dr. Ian Norton, Manager of the World Health Organization’s Emergency Medical Teams Initiative, on Friday.

The United Nations and partner agencies say an estimated 76,000 people have been left homeless, and will need food, water, shelter and medicine. Many parts of the affected islands are uninhabitable, with relief agencies taking survivors by boat and air to other parts of the Bahamas or the United States.

Those interested in supporting relief efforts can check the link here.