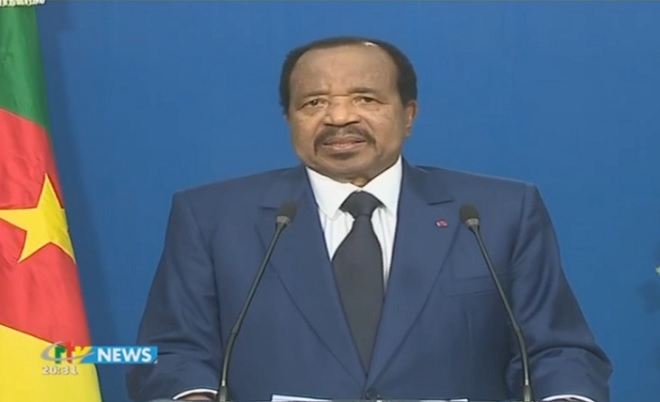 President Paul Biya of Cameroon, looking every bit of his 86 years, delivered a rare televised speech to the nation Tuesday evening – and the first thing many observers noticed was that he spoke only in French, to a nation divided since October 2016 over grievances in its English-speaking regions.

Cameroon’s  Anglophone crisis was at the heart of Biya’s 30-minute speech. What once began as peaceful protests organized by lawyers and teachers pressing for equality – and crushed by Biya’s government – has transformed, in some corners of the nation, into a violent secessionist movement.

Now, Biya is calling for unity and proposed a national dialogue meant to move the country forward. At the same time, he argued that those who choose violence “will have to contend” with security forces.

“We should all work towards a successful dialogue,” Biya said, making clear that the country’s prime minister, Joseph Dion Ngute, will lead the proposed dialogue beginning at the end of this month.

Ngute noted in June that the Cameroonian government wants to negotiate with the armed groups, but that demands for secession of the English-speaking Northwest and Southwest regions of the country in order to establish a separate Ambazonia nation are not on the table.

Cameroon’s crisis gained international attention with the outlawing of the Anglophone movement, the arrest and trial of prominent leaders, the many fatalities and the allegations of human rights violations by both government security forces and armed opposition groups.

The conflict has claimed at least 1,850 lives and left more than a half-million people displaced, according to a May report from the Crisis Group.