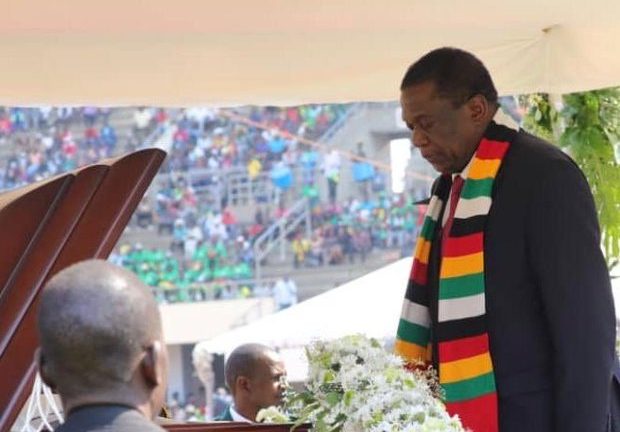 A state funeral was held for former president Robert Mugabe of Zimbabwe on Saturday, but the moment of honor in Harare was one of mixed messages and conflicting emotions.

That’s been the case since Mugabe, the 95-year-old founder of the independent nation, died in a Singapore hospital on September 6. The ambivalence about the Zanu PF leader and his legacy was evident in the National Sports Stadium, where row upon row of empty seats made clear that Zimbabwe was not making a priority of attending the funeral.

Several thousand mourners did, though, including African heads of state and other dignitaries. Most prominent among them was President Emmerson Mnangagwa, who delivered a Mugabe eulogy criticized by those who blame them both for Zimbabwe’s political and economic crises.

Mnangagwa, who replaced Mugabe during a chaotic November 2017 transition that many still consider a coup, hailed the former president as a visionary and champion of a free Zimbabwe.

“In his memory let’s set the wrongs of the world right, opposing injustice, racism and oppression. In his honor let’s continue to reform across all areas,” said Mnangagwa. “As we bury an icon of our past, we invite the world to give our country the new start its people deserve, and walk with us into a brighter future for our people, our region and the continent.”

The presidential appeal was consistent with that of Walter Chidhakwa, the longtime political figure and family spokesman who asked mourners to hear Mugabe’s voice calling them to unity.

Many Zimbabweans refused to honor Mugabe, however, and the family itself struggled to complete burial plans that remained under negotiation with the administration. A planned Sunday service appeared to be canceled with the burial now likely to come in 30 days.