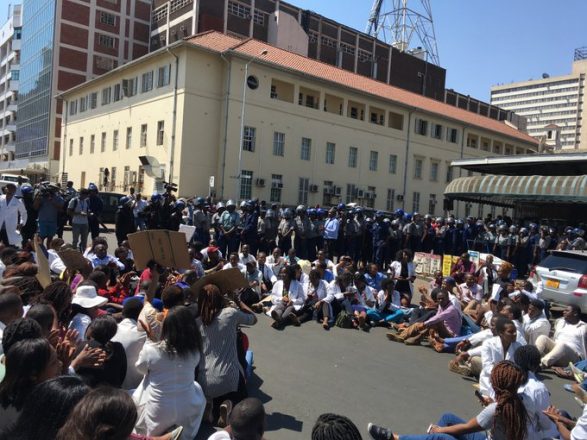 Doctors in Zimbabwe took to the streets Monday, demanding to know where the abducted president of their union has gone and refusing to work until the government answers their question.

Dr. Peter Magombeyi, who has been leading the latest charge for better pay and working conditions in cash-strapped Zimbabwe, was reported missing on Saturday. He was taken from Budiriro, the Harare suburb where he lives.

“As the Ministry of Health and Child Care we are alarmed by this,” said Dr. Obadiah Moyo, the ministry head, in a statement acknowledging the missing Magombeyi.  Moyo said he has asked state security forces to find him “with no stone left unturned,” and urged his colleagues and the public to remain calm.

Members of the Zimbabwe Hospital Doctors Association (ZHDA) responded to the news with the strike, which comes as Magombeyi and the union said they cannot continue providing care in Harare and beyond.

“We simply do not have the means to continue coming to work because the salary is not sufficient,” said the union on August 30. “No satisfactory agreement has been reached so far to insulate the doctors from the current high cost of living.”

Yet as the Zimbabwean doctors moved forward with their labor action, their leader Magombeyi disappeared.

The Zimbabwe Lawyers for Human Rights (ZLHR) has stood in solidarity with the doctors and filed a court brief on behalf of the Magombeyi family, seeking an order that forces the government to find the missing doctor and make their investigation findings public.